You are what you do 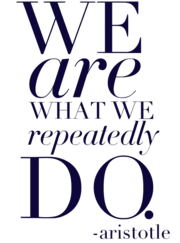 If you haven't read it, I suggest you read my article "Ends and means". The point is that humans have the ability to rationalize anything, for the sake of the greater good, but it their actions are how we measure them, not the ends they achieved. That gets us into this article's point; my personal belief that "you are what you do". Your actions, and your persona are inseparable.

It doesn't matter what you think you are, or wish you were, it matters what you are doing. If you steal, for whatever reasons, then you are a thief. If you assault someone, or intimidate someone, then you are a bully. If you lie, it doesn't matter why; you are still a liar. We will always have reasons and rationalizations for our actions; but what matters is what our actions are. Your actions define who you are at a given time in your life.

You are your job

People have asked why I don't try to become a politician, or a lawyer. Or why I still focus on engineering, and didn't jump higher up the corporate ladder quicker, or do more business or things that would be more profitable? Why not sales and marketing, especially for a company like Apple, since I know so much about them and their market? It is for that reason; you are what you do.

To be a successful politician you must compromise your beliefs to achieve anything. The pragmatics of using any means to achieve your ends whittles away at your soul. So they have to start by believing the ends will justify the means, which means that by definition we shouldn't trust them. If they are not morally corrupted to begin with, they soon will be by the process. So you constantly screw over one group, or make one sacrifice, or work with dirty people and support (through action or inaction) that which is wrong; in order to someday have the power or influence to do what is right.

Very few men have walked this moral tightrope and still been clear. There are few Presidents that I truly admired as ethical individuals, though there are a many more that I can admire as effective leaders. But to be a successful President means a somewhat corrupted person. Those that are the most pure in their beliefs, are often the most maligned.

Look at what it takes to be a good legislator or lawyer; you have to compromise your beliefs in little ways, in order to try to squeak in occasional good things, or make small positive differences. You have to work with snakes and scumbags, all hoping that you won't get too dirty by the association. But you start to compromise to get what you want, one after another. After a while, you have no principles/beliefs left, and can't remember what you once stood for.

Sales and marketing can be fun; I've enjoyed the teams and project I've worked on. But if you are working on spin all day, how are you going to remember what the truth is. Lets face it, a lot of spin is really just how to complete violate the spirit of the truth, while still have some obtuse pedantic letter of the truth to hang on to as moral "defense".

I realize the world isn't black and white, and there's a ton of grays to deal with; and none of us get out completely clean. The point is that you can choose to deal with more or less of something, or do it for more or less time. The more you play in the mud, the dirtier you will get - so you need to be careful or at least know the consequences.

You are who you know

When I was younger, I knew thieves, drug dealers, organized crime participants, gang members, prostitutes, and so on. I worked in inner cities, and did some social work, and my wife was a social worker, as well as my own past; we've all done things we would take back if we could.

Many of "those people" were not so bad people, and did many good things. They could be incredibly compassionate one minute, or to some people; and then the coldest bastards you ever met the next. Many had strict codes of behavior that were more moral (to their own codes) than more mainstream people I've known. But the career choices they had defined them, and started them down a path.

So you hear and listen to their stories that would go something like this;

I agree and understand all of that. They were not immoral or bad people. I would trust them babysitting my kids, I just wouldn't want my kids hanging around with them. On the other hand, their career choice meant that they had to hang out with immoral or bad people. Many people would steal or kill to deal with their habits, or took caveat emptor to levels that would make a confidence man blush. Many would lie, or not pay, and had to be taught "lessons". How long could someone survive in that environment with his or her ethos intact? Answer: not very long. So you can't play in a pigsty and walk away clean; "If you hang around with trouble, you're going to end up in trouble yourself".

Your actions soil you and your friends soil you. We learn from our environment and our environment creates opportunities. That doesn't mean that it is all someone else's fault - it is our fault for staying in those situations. Would you walk around in a seedy neighborhood flashing money? If you wouldn't because it is too risky, then it is the same with hanging out with the wrong elements. You have a responsibility to take yourself out of that environment; whether you wean yourself off, or go cold turkey. Their actions defined them, and their choices meant they were going to do bad things. The only question is how soon and how bad. And for me, and others, it was how long was I going to hang around, and how deep would I go, before I decided that wasn't the environment for me?

What is going to define you is what you've done; your actions. Or in my words, you are what you do.

We're all going to be on our deathbed, someday, probably sooner than we'd like. And we're going to be looking back on our lives, and thinking about what we've done and accomplished; and most of all how.

When you are looking back on you life, would you rather look back at the things you failed at achieving but didn't compromise your beliefs, or at the things you succeeded at getting by compromising what you believed in? When you look back on your friends, are you going to want to think; I had great, funny, nice friends - that were whores, drug-dealers, thieves, crooks and thugs? Or lawyers, politicians, salespeople, and Presidents?

The trick to being better is to stop doing those actions that you don't like, or that aren't the actions of what you want to be. Stop hanging out with people that do them.

Once you start doing the actions that you admire, then you are the sum of those actions as well. If you demonstrate integrity, charity, compassion, tolerance, love and forgiveness, then and you become trustworthy, giving, caring, loving and tolerant. It doesn't matter if you start by "faking it", or your stained past. You can't change your past, you can only learn from it. So learning from your mistakes is better than the alternative.

The best thing about the future is that it isn't the past, and isn't here yet. It is a clean slate, and we get to define what we will be by our actions. Are we going to stand up for what we believe in, by demonstrating it or not? What are you going to do from here on? Those actions will define you. You are what you do.