Win Bigly: Persuasion in a World Where Facts Don't Matter 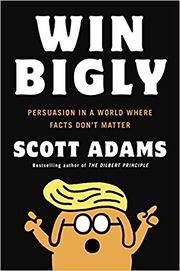 "Win Bigly" is hit or miss. It's very interesting/enlightening on analyzing how persuasion of the public (or individuals) works: a fairly cynical analysis of humans willingness to gobble down confirmation bias. (From a mile high view). And he touches on negotiations. Scott had predicted Trump would win early (based on his powers of persuasion) and he explains why. He's not necessarily a fan of Trump... (he voted left in most prior elections)... but this book is filled with where he thinks Trump is dead on-target with some of his distractions and persuasion efforts, and that can be a hard read for some (even if the point is about persuasion, not likability/morality/positions).

If you're not a #NeverTrump'er, or you have a very analytical personality and want to think of why people react or vote the way they do, this is a brilliant book. So I thoroughly enjoyed it, though it fit a lot of my confirmation biases to begin with.

In some ways the book is highly cynical. Humans are