Of course the reality is the opposite. You don't need to justify why you get to keep your rights/liberties, others have to justify why they should get to take them away. So the proper answer to that question is, "Because, fuck you, that’s why!” If you can take someone's AR15, then what moral ground to you have to prevent them from taking your cell phone, car, Internet access, alcohol, pets, or anything else that isn’t an absolute necessity.

If what they meant to ask was “why do you want an AR-15” or other “assault rifle”, not that’s a more reasonable question. 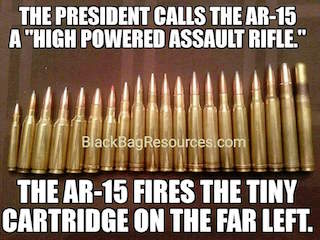 In the end, gun owners shouldn't have to justify why they need permission to own the most popular hunting and sporting rifle in the nation. Anti-liberty advocates need to find very just cause before they can encroach on them. Since they can, or at least haven't had good reasons, any time in the past, they just go for emotional appeals to the uninformed to try to put two groups against each other (divide us based on understanding of issues, with the informed being for gun rights, and the uninformed voting against them).