The idea of White Privilege is to pretend that Jaden Smith, or Barack Obama's kids, have fewer opportunities than some poor, white, son-of-meth-head does, by nature of skin color. Of course that's complete bullshit. The facts are that many black individuals will have far more opportunities than many white ones, and many black sub-groups well outperform many white-sub-groups. Asians outperform whites. Black immigrants outperform both the black and white national averages, because they're not handicapped with black gang-culture. So while there is some minor burden of color, they are far outweighed by individual or sub-group advantages. Thus the people that repeat the fallacy of "white privilege" are either racists, idiots, or racist idiots -- none with a clue on the way the real world works.

More than that, the solution is not blaming the system: that just teaches people to accept their fate and a blame someone else for every setback (be victims). The solution is teaching people that they can overcome the adversity we all have (take responsibility = be empowered) -- and most of that adversity is caused by self, family, sub-cultural (in descending order), and certainly not national/institutional racism (which is like 59th on the list of things holding anyone back).

The only thing we know for sure, is that all the progressives cures, haven't made things better and appear to have made things worse. Blacks had more opportunities and mobility, less single-parenthood, and so on, before we created the welfare state to hold them down. And the people screaming about the inequalities are holding the blacks down, do more to hold those kids down than the ones telling them that it doesn't matter and they can do more if they ignore color than if they wallow in it. So which is better?

Blacks have more opportunities here, than anywhere else in the world (just like whites, asians, latino's, etc). We should be reminding everyone of that. Instead of telling black kids they're destined to fail because of their skin color. Or that they're handicapped because of it. Maybe a little -- but the fact that they're a black kid in AMERICA instead of arab kid in Somalia (or latino kid in the favela of brazil) of gives them a HUGE advantages in life that most of the world should be envious of. So the handicap of being brown is dwarfed by the opportunities of being in America. And if they focus on the advantages instead of the disadvantages they have, they'll go much further than the other way around. 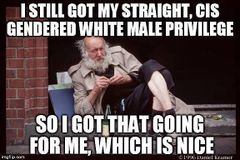 There's also a fuzziness on what is a white? Italians, Mexicans, Irish were not considered "white" at certain points in time in history. For others they are. So which is it? Are they privileged or not?

There can be no "white privilege" since "whites" don't think of themselves as a group, an Italian doesn't look at a Swede and say, "Hey my Brotha from another Motha", or "we melatonin deficients have to stick together".

I've never met an Asian, Latino, Scandanavian, Italian, Russian, etc., and thought, "whew there's someone more like me than that black guy: I'd like to hire him". Though I've met a few blacks that did that to other blacks... while Brits or Germans I knew, tended to resent the French for past wrongs (and vise versa), or Castilians or Basks that weren't too happy with the rest of Spain, and so on, ad infinitum.

As Anthony Petrosino pointed out,

I'm sure all of the victims had the last thought, "at least I'm not black".

You could tell similar stories of Irish, or I grew up as a "Sand Nigger" (Iranian kid).

Does an equally qualified/healthy/experience/personalitied/etc white person have some advantage (in America), in a few more cases? OK. Sure. I can buy that color doesn't hurt, in at least a few ways. No one is denying there's racism/culturalism -- just the idea that there's institutional racism, and that government will somehow make it better. Color may matter a little, it just matters less than other things.

So racial biases (and old thinking) exists. It sucks. But "White Privilege" is vapid philosophy because there are so many stronger injustices in life. When the Jews were being sent to the ovens, or the cambodians were being shot and thrown into trenches, they weren’t thinking, “well thank God I’m not black”. That’s not to demean the injustices of being black, but just to keep them in perspective. And I don’t think privilege theory does that.

Who do you think has it more advantanges, a white kid with lymphoma or a healthy black kid? A black son of a millionaire, or a Vietnamese boat-kid that was smuggled here and whose parents worked in a sweat shop to put him through school? So color may matter, but it probably matters a lot less than culture, experience, effort, personality, hobbies, etc, and pure luck of birth (diseases/heredity/genetics/etc). We're all a complex recipe of ingredients, and singling a minor one out, and saying "sea salt makes all the difference in this recipe over kosher salt", is ignoring all the other ingredients and preparation steps in the meal.

The reason people perpetuate the myth, is because there's money (or votes) in dividing us, and pretending racism is at the root of every problem. The reason follow this myths are too numerous to name: gullibility, guilt, hate, and so on.

So to me "White Privilege" is dumb. Humans are individuals and multi-dimensionally. Racism like "white privilege" is pretending that color matters more than all those other things -- or that correcting that one thing, will change all the other. So we shouldn't be focused on the micro, and instead look at the macro.