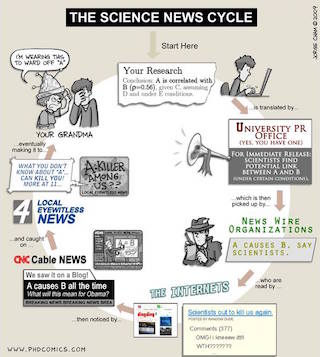 What is the mythical, "War on Science" really about? Money and corruption. The media and left wants an unlimited purse to funnel money to special interests and political supporters, posing as Scientists, in the name of science (e.g. use Science to further their alt-science agenda). And any attempts to reign ridiculous spending in, is attacked as being, "Anti-Science". But the rational know that when you mix science and politics, you get politics, not Science. So whenever you hear someone complaining that Conservatives are against Science, remember that means they're against politics masquerading as Science.

Each time the NSF or NIH funds one of these projects, that much money is getting sucked out of the economy (jobs/growth) and getting diverted from going to real science. And every time the Republicans try to control any of that, it gets labeled as political interference and an attack on science, and the gullible buy-in.

If you care about the war on science, the anti-science jihadi's are those who opposed reigning in this kind of waste, and that's the Democrats.