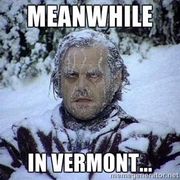 Vermont keeps electing Bernie Sanders. If that doesn't tell you enough of their stupid ideology, they started a program to pay people $10,000 to come there, where they will be taxed nearly that in a year (not counting moving fees). So a 1-2 year break-even is great for Vermont, if there's any rubes gullible enough to fall for that. I know some people I'd pay $10,000 to move to Vermont as well. A few of them would be happy to call Sanders their senator.

A few highlights (borrowed from friends):

By comparison, their next door neighbor (New Hampshire) has no income tax or sales tax: and it's state and local tax burden ranks 44th. Its business tax climate ranks 7th.

Maybe Vermont should focus on un-fucking its tax system, rather than gimmicky handouts for "up to 100" remote employees who are moving to the state anyway?