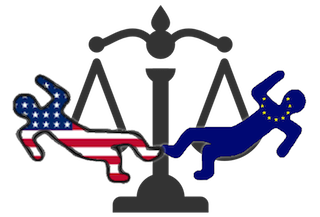 When the facts support your argument, you share the facts -- when they don't, some will resort to partial information (cherry picking), fallacies, or other deceptions. Gun advocates try to do the former (educate), gun controllers are often caught doing the latter (miseducate). This article offers examples of that. If any of this information comes as a surprise to you, then it shows that the media and the gun-controllers are effective propagandists that have deceived the public, as these are just basic facts.

The media claims U.S. Gun Murder rate is higher than other nations

Here are a few frauds (fallacies) used with this argument:

And so on. Which shows that by misrepresenting/omitting/skewing data that, they're either gullible, or intentionally deceiving those who are (fools or frauds). I could go on with logical fallacies and misrepresentation. And at the end of this article, I have examples of links show cooked samples/sources. That proves that the gun-control advocates are either uninformed or intentionally deceptive. But let's be positive and educate folks on the facts instead.

What are the facts?

Ignore the fragment graphs the media usually provides, where does the U.S rank in the world?

Why do others pick OECD countries, knowing we're unlike them (and that Americas comparison is more valid)? Because the facts don't show what they want, and misleading people for an agenda is what they want.

They try to argue that it's economics based -- but that opens another can of worms (for another article). We know murder rates don't correlate well to economics. How do we know that? Some poor countries (like Japan) have much lower murder rates than rich countries, and within the U.S., rural poor areas generally have lower murder rates than richer urban ones. So the implication is specious, and they know it. They're not that dumb, they're just that dishonest (and they're counting on their base to be that gullible).

Let's play their game of make-believe, and pretend we're like Europe, and compare ourselves to OECD countries... with one simple correction. Let's correct for cultural (or at least racial) breakdowns.

In the U.S. Blacks are 1/7th the population, but over 1/2 of all our murders, and Latino’s are about the same 15% of the population, and are responsible for over half the rest of murders. So let's just adjust for racial crime rates (since Europe has virtually no blacks or latinos compare to the U.S). What would we be like with their racial/cultural diversity? Face it, unless you're a black or latino in a gang, those murder rates don't impact you, and they're dragging the average up.

So if we correct for those demographic differences (or just compare an accurate subset), we find that the U.S. (red) in in the middle of European murder rates, better than Ireland, Canada, Luxembourg and so on. (And Ireland doesn't count manslaughter in homicides like the rest of the world does, or they'd be even higher). 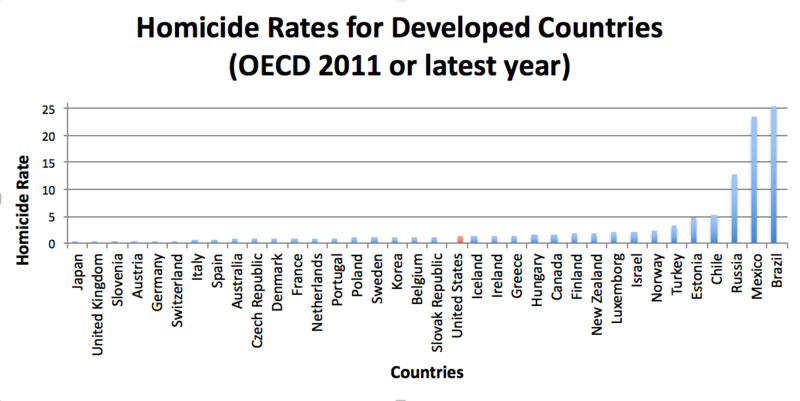 So while this kind of correction is not only mathematically sound, but required for statistics 101 (always normalize your samples), you'll never see this kind of scientific/factual corrections or call-out for not doing them, in any of the media or anti-gunners propaganda for a reason. Which shows that anyone who doesn’t make these correction either doesn’t know what they're talking about, or worse, they do and they're intentionally misleading people (propagandists).

Now at this point many people scream, "Racist", trying to distract the fact that they just lost the argument. But that shows they don't know what words mean.

The prime point that the gun-controllers are trying to make is that the reason the U.S. has a higher murder rate, is because we don't have gun control.

Even if we did have a higher murder rate (which we don't), and it was consistent across all countries with/without gun control (which it isn't), that's still what's known as the correlation proves causation fallacy (post hoc ergo propter hoc). It only shows that there might be a correlation, if there's no other stronger cause. But since they are cherry-picked the data to begin with, they have a lie, trying to prove a fallacy.

The facts are, there is a correlation -- but it's the wrong way.

In fact, America being above the trend line (as an anomoly) means if you look at Europe or the world without the U.S., then the slope is higher (and correlation is stronger).

So ironically, the exact points that gun-controllers are trying to bring up by saying, "let's compare the U.S. to Europe", shows the exact opposite correlation that they think it does, even if we cook the numbers and skew the subset the way they want. Just less so than if we look at them more honestly.

One of the most important points, that they don't address is trends. We know that Europe had lower homicide rates to begin with, so that fact that they're still lower (regardless of gun control), isn't a surprise. The question is, what happened to murder rates after countries enacted gun control? In those cases, we know that murder rates either went up, or at least didn't go down as fast as the countries that enacted no gun control, or loosened gun control.

The fact that the gun-controllers lie regularly (use fallacies, falsehoods and numbers tricks) to sell their points to the gullible followers, sure hints that there's no good data to support their causes, or they wouldn't have to keep using bad data and tricks. While the gun-rights folks are willing to openly discuss the math, and show their work (and not cherry pick and skew, or at least do so openly), which also hints that the data supports their point, or at least shows that the gun-controllers data isn't very good.

Let's give the gun-controllers the benefit of the doubt, pretend they made honest mistakes (and none of them know anything about basic statistics). And let's assume that correlation isn't causation, and there's some other reason why the evidence showing that more guns = less crime (murder) is wrong too (there's an alternative cause, and thus we have no evidence either way). Even with all that bias towards gun-controllers, it still supports the gun-rights folks argument. It would mean that despite trying gun-control in hundreds of countries, there's no good evidence that it helped. Thus, if you have the choice of supporting liberty (the natural right of self defense) or supporting tyranny (gun control), and the latter has no positive impacts, that you should always err on the side of liberty over tyranny.

I've only been studying this topic for 35 years or so. If someone has something new or contradictory, let me know. I'm always interested. But until then, all the evidence I've seen shows that gun-controllers are either liars, or aren't very good at math/logic -- and that all the better evidence is that gun control does nothing observable to help with murders, crimes or suicide (I talk about the others in other articles), which is no gain for a high cost of taking away people's right to defend themselves (and buy/trade in tools they like, or enjoy the hobbies they want to).