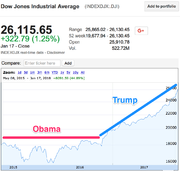 I saw some silliness about how the current bull market has nothing to do with '45 (Trump). That to me is as dumb as giving him all the credit. Presidents can either (a) create headwinds on growth (raise taxes, regulations, energy costs) (b) put tailwinds on growth (decrease taxes, regulations, and lower energy costs through encouraging drilling/pipelines). That can be swamped by other factors, but they are a known variable in the equations -- and they do have SOME ability to influence markets.

I don't care how people vote, or who they like or not. Love or hate Trump anyways, whatever. But I do care about the truth, and the truth is that Trumponomics has done more positive for the economy than Obamanomics did.

The boost of lowered regulations and lowered taxes, seems to have had a noticeably positive effect -- despite the negative pressures of Kim Il Jun's ICBM's (thanks Clinton) and multiple Natural disasters hitting last year (which also tends to cool growth and consumer confidence).

If Hillary had been elected, there's a good chance that we would have had a bear market (and we would have got the pullback that people were expecting from a 3rd Term of Obamanomics. Hillary's threat of less energy, more regulation and higher taxes would have been a weight on the market. We would not have seen repatriation of foreign cash, more jobs coming back (putting positive pressure on salaries and hiring).

We have no idea how MUCH it would have mattered (as in exact dollar amounts). But historically, we can speculate pretty clearly that:

We can debate how much... but the point is the left wants to deny that economics applies to any of their policies, or the Republican ones, because if people thought about the truth, fewer Democrats would ever win. So they have to lie.

Of course Republicans will do exactly what the Democrats do, and claim an entire uptrend is because of them and their policies (and any corrections are because of the other sides policies). And the truth is the tide comes in or out, no matter who is in office. Presidents can just make it better or worse. But it's a lie when the Democrats do it (false because the markets are succeeding in spite of their policies/pressures), it's an exaggeration when the Republicans do it (there's an element of truth, though they might be overstating it).

You can like or dislike Trump... I don't care. But denial that Trumponomics is better for the economy (in the short term) than Obamanomics, is silly. Markets like companies costs going down, and employment and salaries going up.

You can debate the morality of that, and want to tax and regulate more anyways -- because you think it's a net good for humanity or the culture, in SPITE of the economic costs. I'm fine with that. But denying that economics applies, means I'm going to get out the keyboard and mansplain what any moderately intelligent person should already know.

If we had anything like this under Obama, all the media and left would be screaming what a great job he was doing. Since it's Trump, they want to talk about anything else.

In the end, markets are cyclic, and they have many variables driving them up or down. But some key variables include things like:

All these things are good for the local economy, at least in the short term. And people that can't admit those things have anything to do with the bull market, are just proving their bias.