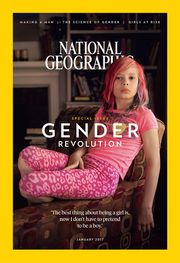 I look at this story with mixed feelings, that won’t completely solidify until after they publish, and I get to read what they actually wrote. But so far, it’s not looking good to me, in how either NatGeo or their supporters are treating it.

The left is, of course, celebrating it as ground breaking (before they know anything about it). And the right is pointing out that this may be the first time NatGeo celebrated child abuse on their cover. Both have some points.

Those aren’t great numbers, and there’s still a lot of debate on whether re-assignment is “doing no harm” or not. And many as adults, claim that their childhoods were harmed by this cult of transgender[4], which they claim exploited them as transgender for adult political agendas and did more harm to them than good. So it’s not clear whether being overly welcoming towards a trans-gender phase is more or less harmful than being unaccepting of it. So I leave it to the parents and child to decide that one (with some reservations). But publicly outing and becoming an advocate for the cause, is going beyond private acceptance or not.

Respect is not exploitation

I've known a few trans-people. Mostly, I feel sad for them (not pity, more empathy at a harder path in life), like if they have bipolar/schizophrenia/etc. It's a real thing, it's not "just in their head", and it means they're going to have struggles because of it. But it is a disorder, their brian is wired "different”, society will stigmatize them because of that, and they are going to struggle with internal demons more than external ones. The DSM-5 recognizes this as a psychological disorder, and it’s not an easy diagnosis to live with (for them, or people around them).

They deserve to be treated with respect, but not exploitation. I don't want their lives to be any harder than they have to be. And playing up their difference, may just magnify those struggles by making them more public. And as adults we sort of want to discourage our children from doing things that hurt themselves or make their lives harder: e.g. not encouraging them to be self-destructive activists. (And activism makes them a lightening rod: and comes with costs).

So accepting your adult child’s decisions is loving acceptance. But going on to make your young child into the poster-child of a mental disorder seems cruel. That's getting closer to the parents exploiting the child entertainers or child prodigy/athlete thing.

This pre-sensationalizing their article on trans-children feels like the difference between reading an article on the struggles of being a little person (or even a reality show on it), versus watching midget wrestling on TV. I don’t begrudge people with dwarfism being entertainers, or doing what they want in life (and they don’t need my protection), but there are lines where it’s unsavory. Exploiting kids for clickbait is well past those lines for me.

I have no problem with psychology/sociology journals doing real studies, and trying to educate the public on this, and help them become more accepting of the malady. But when NatGeo pre-promotes a story with sensational photography, that feels like click-bait journalism, and all the far left sources are ready to promote and polarize society for their political agenda (social justice of the day)? Their celebrating, "making history”, and "look at how comfortable this child and his parents/friends are, and you're a bigot if you don't agree” fluff — all makes it feel like shock-jock child exploitation. And each award the story will win by far left outfits for the "ground-breaking” and “daring” article, (by conforming to the far left’s divisive and risky agendas), when we're unsure of the harm, or if role-modeling doesn't hurt more (in the long term) than it helps with self acceptance (in the short term), just pushes me further and further away from wanting to celebrate the story.

So it's hard to know the sincerity of everything involved. I just feel uncomfortable with NatGeo feeling more like a tabloid using child exploitation for ratings, than that of a more cautious and careful investigation of the issue. All I know is there’s a lot of ambiguity on what’s the right path for transgender people (especially kids) — but exploitation of kids for political agendas (trans-gender or not) is more real, more known, and a far easier judgement to make. And Nat Geo and supporters seem to be very close to that line, and way too eager to cross it.