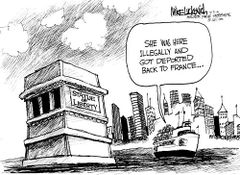 Some have argued all this American xenophobia is new and has gotten worse, or is because of Republicans. Didn't we used to say, "give me your tired, your poor, your huddled masses yearning to breathe free". Nope. That's a fictional history invented by progressives to cover up for their past. An oversimplification of our history is that Democrats/Progressives/Left have tried to exclude people unlike them, outlawed Asian immigration, created our quota system, interned people unlike us (Japanese, Italians, Germans) -- going back to 1790. But it was the Republicans that have both loosened the restrictions (while also demanding enforcement) of the laws we do have. If the people coming in were like you, it was fine. If they weren't like you, they generally got pushed to their own areas of the city/country/state. This article covers a few pieces of history, glossed over in the poem about your tired, poor, huddled masses, yearning to be free.

A more accurate brief history would include the following highlights:

Finally, in 1990, it was George H. W. Bush that allowed in homosexual immigrants. [9] That's something you don't hear much about.

Many of the quotas and anti-immigrant sentiments and laws were started by the left. (Think Jackson or Breckinridge). The right was more likely to believe in meritocracy and pro business -- so more cheap labor never concerned them. But as the left concerned itself with things like social programs and driving up wages, they hated cheap immigrant labor, and treated them accordingly.

Statue of Liberty plaque is an ideal promoted by the French, but it isn't reality of our immigration laws:

The left will use this to proclaim, "we used to have Open-Borders, it's what made America Great"... they'll say out of one side of their mouth. While proclaiming America was never that great out of the other. But the facts are more nuanced. We often oppressed immigration from places too unlike us (Eastern Europe, the Middle East, Far East, and so on). And we wisely wanted workers looking for opportunities, and discouraged those looking for handouts.

The problem is that you have open borders, or Social programs, but not both -- or all the moochers in the world will come and swamp your social safety nets, and create backlash.