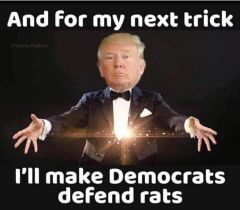 Trump is either a communications genius, or the media/left are complete idiots to be outclassed by a self gratifying dolt. Look at the basics of the latest histrionics over (1) the Racist attack on fab-four: Trump shit-tweets how radical the most fanatical 4 in the far left party, "The Squad" are. The left has to defend them (defining themselves as like them), or admit he was right. (2) The next week it is about Baltimore: Trump shit-tweets the truth about how bad Elijah Cummings district is. The left and the media can admit truth, or make fools of themselves calling him a racist and denying reality: they choose the latter.

The far-left and their media keeps going with "anything Trump says is wrong".... so he keeps saying, "the sun is bright" and they keep saying, "no it is NOT, that's racist!" And the sane public remembers the abrasive truth of Trump, and the foolish dishonesty of the media/left. And the Democrats think they're winning? Either he’s intentionally baiting them, as part of his plan, or they’re so incompetent that they can’t beat a bumbling buffoon and his shit tweets. So if Trump's an idiot, they are dumber. Or he's been using the left's constant under-estimation of him, to bait them into shooting themselves in the foot. (They win the little fight, by losing the bigger one). And the #resistance can't stop falling for it. Either doesn’t bode well for the left. 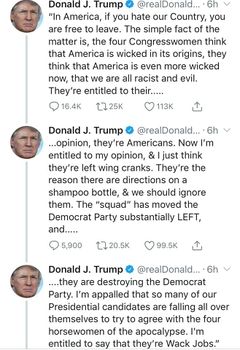 The left has two fatal conceits:

So if you want to beat them, just throw out some bait that they can't resist, and the #resistors will reflexively over-react or align themselves to dumb people or causes. Whether it's OpenBorders, or the bimbo squad of America haters. He baits, and they bite -- and become aligned to the fringe.

Trump was always an in-artful and blunt communicator (at best), that says things that are usually materially true in function and NY blunt or inaccurate in the micro. But people tend to remember the macro! Everyone with a clue instinctively knows this. The left is still eternally surprised by everything he says, and thus feels compelled to over-react to him. So: 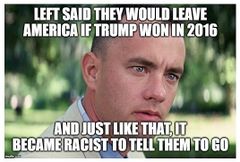 In the end, who do you think this stuff plays better for?

Trump's poll numbers are rising nationally. They're being outplayed.

That's not defending Trump, it's defending common sense. The more extreme the left looks, the fewer people outside a few coastal cities they'll appeal to. And they branded themselves as the party of those 4 anti-semitic fanatics. 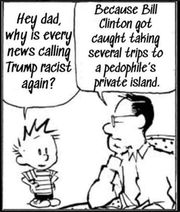 You'd think a few years in to his Presidency, the left/media would catch on. But Trump is still playing them by hitting their knees is just the right place, and watching them do the wrong thing in response. Whatever the cause, it is the same result: the sane public thinks, "40 years into his public life, and 2 1/2 years into his Presidency, anyone that acts surprised by his overstatements or bluster is either a partisan polemic, or not very bright."

I'd said the same thing to the left/media that I said when Trump won the election. If you think he's bad/dangerous, then you need to keep your powder dry. Save the outrage for the really big things you keep warning us is coming. If the worst that is, is that he rounds up a few criminal illegal aliens, or he insulted some anti-American idiots, then the people are thinking, "that's not really that bad, those folks are nut jobs".

But the media/left needs to freak out over everything because it gives them short term outrage credibility with their friends, and bumps in polls and clicks.... and long term it keeps playing to his advantage as the majority of the nation gets the hypocrisy of the left, and the loose grained accuracy of what Trump said. And the Democrats keep falling for it. It's not a tough choice between a free-market America loving asshole and America-hating hypocrites that want a Socialist country with open borders.

So these million micro outrages over nothing burgers with whiney sauce, may play to the left's base in the short term. But they are immunizing the Tangerine Trumpet against the histrionics of the left/media. And as long as you have the likes of the Fab 4 slamming America with their approval rate at 8%... Trump is winning by getting the left/media to defend them.