The Big Lie: Exposing the Nazi Roots of the American Left 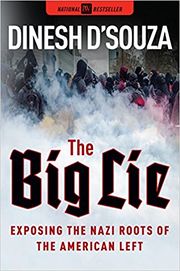 The Big Lie: Exposing the Nazi Roots of the American Left is a book that just reiterates the unsavory parts of the left's history that they would rather you forget. Jonah Goldberg covered this ground better in "Liberal Fascism", but it is still a readable book with Dinesh's own style and observation. What you'll get out of it is inversely related to how much you know about the History of the American left, and how insightful you are already. For me, it was an entertaining and fluffy read with a few new insights but lots of confirmation bias. For somewhat unawares about the dark side of progressivism, or the left side of fascism, it'll be jaw dropping and fascinating. But if you're a partisan lefty, you'll feel that it's all lies and disinformation... just like the mirror and scale are lying to you.

Dinesh looks at American history through the unabashed eyes of an America lover. Which of course will disgust the left, who historically have often not been that (preferring to love what they would like to make America into, which looks more like Europe than the U.S.).

The purpose is to refute the "Big Lie" being told by Democrats that fascism and Nazism are “right wing,” (as well as the whole "Trump/Republicans are Hitler" narrative that was going on in 2016), and sell us on his view of Republicans: the party of individuals, small government, and economic freedom.

Of course the truth is that America is not Germany, so neither side is Hitler, exactly. But he touches on the truths that it was the American left that has its history firmly in the camp of the Indian genocide, Slavery, violence at the turn of the 19th century and pro-Marxism/labor movements, temperance, was pro-Fascism before WWII, and was on the wrong side of the Civil War and Civil Rights, and so on. Thus, while I don't think Democrats are Hitler, I do think many of them were once Hitler apologists, and that many support a much more similar agenda in the U.S. to Hitler's economic policies than anything the Conservatives/Republicans have.

So this is his willingness to flip the narrative and offer evidence that anyone claiming the right/Trump is like Hitler, is probably ignoring far more similarities on their own side of the aisle, or in his words, “turn the tables on the Left, refute their bogus narrative, expose their big lie, and pin the Nazi tail precisely where it belongs—on the Democrat donkey”. Is that completely fair? Probably not. But when the other side is trying to be unfair first, this kind of tit-for-tat'ism is more fair than just accepting false claims, or not hitting back. 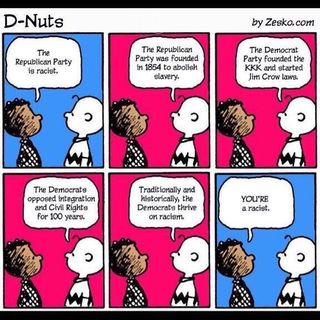 Overall, The Big Lie is rich in historical data and clearly demonstrates that fascism and Nazism belong on the political left. Which is why the left will hate it and try to change the narrative, desperately:

So the problem with books or movies like this, is they have a few snippets of goodness and truth, and they are part of the whole truth. But they do commit lies of omission, or lack of balance. And of course the other side will use all of those, and many imagined wrongs in their false narratives, as excuses to dodge learning and growth. Thus the people that need to listen, won't. Those that do listen, will just being doing confirmation bias. And thus while it's mostly true, entertaining, and has valid points, it's unlikely to do much to convince either side of anything new, or anything they don't already believe about the other.