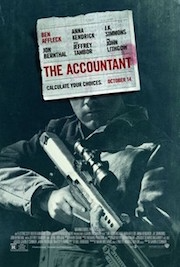 So I went and saw "the Accountant". Rotten Tomatoes gave me low expectations with a 51% reviewer rating, but the 86% audience score gave me some hope that it wouldn't be horrid. Of course their audience tends to be younger, and doesn't always run true to my tastes. But, "what the heck", how bad could it be?

Of course I blocked Ben Affleck as either Daredevil or Batman out of my mind. There was also Gili, Man about Town, Surviving Christmas, Jersey Girl. OMG, what was I thinking?

The good news is that while this wasn't Good Will Hunting, it wasn't "A body to die for: the Aaron Henry Story" either. It was a completely watchable semi-action thriller. In fact, it's probably the best Assassin with Aspergers film you'll see all year. Think Rain-man meets The Professional, without the academy award performances, and half the intensity, and a little more shlock and clichéd.

The movie went exactly where I expected it to go, with watchable performances, reasonable dialog, and a reasonable plot-line. Once you get past that it's a KickAss remake, if KickAss took itself seriously, it's not half bad.

If you want to wait for video, or for an airplane, the 2 hours will go by at a reasonable clip.