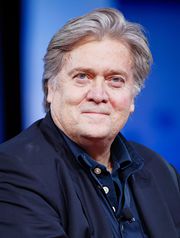 If you believe the left, Steve Bannon is a homophobic, racist, anti-semite, xenophobe. Or an accomplished naval officer, with two Masters Degrees, an investment banking background, an unapologetic pro-Israel and pro-liberty CEO of Breitbart.com (if you believe the facts). I have found no evidence of the former, though there's certainly more complexity and some things to not love about his political positions. So there's the caricature I usually hear on the likes of NPR or in most of the media... but then places like The Boston Globe did a shockingly fair piece on him. I have never gotten an answer why a racist, anti-semite would have been the editor for Breitbart: founded by Andrew (a Jew) to rebut the anti-Jewish and anti-Israel agenda in the mainstream media. Or why many Jews on staff would defend such an imagined bigot. But when it comes to hating right wingers, things don't need to make sense for the left.

Steve got a masters degree in National Security from Georgetown, and later an MBA (with honors) from Harvard. He was also a naval officer (special assistant to the Chief of Naval Operations), then worked at Goldman Sachs as an investment banker in the Mergers & Acquisitions Department before leaving and starting his own Bannon & Co. boutique investment bank (specializing in media), and made fuckton of money by negotiating the sale of Castle Rock Entertainment to Ted Turner (and getting a stake in 5 shows, including Seinfeld). After Andrew Breitbart died, Ben Shapiro was an editor at Brietbart.com, and Steve Bannon took over as executive chairman of the board. It’s important to remember that Breitbart.com was created by Andrew after a visit to Israel in summer 2007, with the aim of founding a site "that would be unapologetically pro-freedom and pro-Israel”. Not your normal anti-semitic charter.

Ben Shapiro took a #nevertrump editorial position, which clashed with others at Breitbart. Then when one of the journalists (Michelle Fields) claimed campaign manager Corey Lewandowsk of battery (for grabbing her arm at a Trump press conference), and she and he didn’t like how they were treated by Breitbart.com so they left. Later Palm Beach police dropped charges saying the evidence didn’t support a crime. But alas, Ben went over to a site TruthRevolt.com, and went and bashed Bannon and Breitbart because Shapiro was a paleoconservative, and didn’t like the alternative spin that Bannon was allowing.

Bannon said in one unconfirmed interview that he was willing to let Breitbart.com be the voice of the alternative right (long before that term was completely solidified and didn't mean what it means today), and the media ran with that, taking the most unsavory exaggerations of anything anyone that claimed to be “alt-right” had said, and tried to tar and feather everyone in the movement with. And thus, Bannon became an anti-semitic, racist, and xenophobe.

They’re all laughable claims, on very thin threads. Yes, the once editor of a site founded and named after a Jewish guy (Andrew Breitbart), who created one of the most pro-Israel sites out there, with multiple Jews in prominent positions working for/with him (who never had any complaints), is considered an anti-semite, why? Because a decade ago, his ex-wife claims they were fighting over sending their daughters to Archer School for Girls, and she claimed he said that he didn't like the way Jews raise their kids to be 'whiney brats’ — then paid for them to go to that school anyways. That and because one a statement got "accidentally" got misattributed to Bannon, when one of his writers (David Horowitz, a Jewish author), had written in a pro-Israel publication (Breitbart, which Bannon controlled), and had once said, "Bill Kristol was a renegade Jew” in response to Kristol supporting Hillary and Obama over Trump (the former are pro Muslim Brotherhood and anti-Israel/Netanyahu). That’s it? That's the best they have? It's like they're not even trying.

After some friends (Dennis Prager, Alan Dershowitz) suggested Bannon sue for libel, the anti-defamation league had to back down on their false claim he was an anti-semite. But the media still echoes the anti-semite claim, while it ignores that Hillary Clinton screamed at one of her aids (in front of multiple witnesses) that he was a, “Fucking Jew Bastard”, called someone else a “Stupid Kike”, among other far more anti-semitic things she did, or that she was endorsed by the Grand Dragon of KKK, and endorsed the BLM movement which was responsible for the murder of whites and cops. Meanwhile, the media whines that Trump didn’t renounce David Duke, or is freaking out about a made-up story that a sheriff’s badge shaped star on a retweet, was Trump's secret signal to all the anti-semites that he was one of them. The double-standards are obvious. Anyone that buys that Breitbart, Bannon and/or Trump is anti-semitic is either a fool (uninformed) or a fraud (liar).

Well, at least the claims of racism against Bannon are on more solid ground, based on Breitbart.com being such a racist publication. How do we know that? The media claimed that Trump’s claims about minority/immigrant crimes were false and made up -- so Breitbart started publishing news to refute those claims (what the left calls sensationalizing crimes by minorities/illegals, and a campaign of racism). This was done to refute the MSM burying major events under the whitewash of political correctness: called counter-balance. But the followers of herd-think either don't know, or intentionally bury, all that context.

The best examples that places like media-matters can offer is "a race-baiting article authored by editor-at-large John Nolte”, because when Vester Lee Flanagan murdered a reporter (Alison Parker) and her cameraman (Adam Ward) on live TV, over race — and had tweeted and wrote a manifesto that claimed he was doing the shooting because of Dylan Roof and a race war. John Nolte wrote an article that told the truth about what happened, and had a sensationalized headline that said, “Race Murder in Virginia: Black Reporter suspected of executing White Colleagues - on Live Television”. Shocking how the headline fit the facts. And all the leftist sources (New York magazine, Vox, DailyKos, Slate, HuffPo) chimed in with their tweets (now deleted), about how racist that was, thus Breitbart was now a racist rag, as was Bannon for allowing it. But if that’s their biggest complaint (and if you can find any worse, I welcome them), that they write overly sensational but truthful headlines, then I’m not buying it. I’ve researched for anything worse, but to date haven’t found anything beyond many other overly-sensationalized headlines at the HuffPo or NYT, just from the other side of the aisle (ideological bigotry against conservatives, fly-over-states and fiscally competent Tea-baggers).

At least Bannon is part of the Woman-hating misogynistic he-man’s club. How do we know? Because despite working with women executives and employees for decades, and having no known problems, his ex-wife alleges that in 1996 when they were getting a divorce and having a fight, she threw him out. And when he tried to drive away, she approached the car and spit on him, and he grabbed her wrist and neck and tried to pull her into the car. The girls are 21, and they and their Mom have had no documented complaints since then. Or worse, he was once defending conservative Women that he admired, he said of Sarah Palin, Ann Coulter, and Michele Bachmann that, they threaten the progressive narrative, because “...the women that would lead this country be would be pro-family, they would have husbands, they would love their children. They wouldn’t be a bunch of dykes that came from the Seven Sisters schools up in New England. That drives the left insane and that’s why they hate these women.” While not exactly worded sensitive, I’m not sure how defending one group of women against another is inherently sexist.

The left loves to pretend that everyone who is white and a nationalist, is a Nazi (or Alt-Right). But the implication is that their view is exclusionary, that this nation is only for white people: that's propaganda (a lie). There's certainly a few that think that, but fewer than Democrats who are anarchists, black supremacists, or violent terrorists and criminals. So the broad brushing of the left and their media, just proves to the informed or those who get nuance, that the left are bigoted idiots. The epitome of this is Steve Banon talking about American Nationalism:

That got brushed over in the interview and is never quoted by the left. That Banon (and Trump's) ideas of "America First", was not about excluding people of any race/creed/color, it was about putting the interests of the country (and by that they mean constitutionality, liberty and tolerance), above their prior national identities or other nations interests. Anyone that plays that off as racist shows that they're ignorant bigots and not to be taken seriously on this topic.

So if that’s the worst you can find against Steve Bannon, a 62 year old sailor, then the guy just doesn’t come across that bad to me. And it seems like the media is playing hypocritical partisan histrionics.