If there's ever a stupid cause, Starbucks will be there. It plays well to their base... most rational people roll their eye's and move on. The latest was an Social Justice Warrior named Holly, call the cops on two guys for loitering. Because they were black, #BoycottStarbucks went viral and they got accused of unconscious bias, before anyone bothered to investigate or explore why the cops were called. Holly was thrown under the bus, the CEO apologized and decided to shut down every store for a day for indoctrination training, and everyone did the right overreactions to the movement. The only thing sacrificed was any truth, skepticism or investigation. 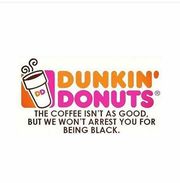 Two black guys hang out at Starbucks, cops are called for loitering, and they get arrested. A bunch of people blame Starbucks for racism, including the CEO (who apologized and promised more sensitivity training). The problem is that none of the details of what actually happened had been released, and the story doesn't make sense. Anyone with one scintilla of critical thinking skills would ask questions like:

Context matters -- this could vary from completely true (and thus it was racist), to complete bullshit (there might be lots of context we don't know). The only thing we know, based on all the cases that turned out to be fake-racism in the past, is that you're a gullible rube if you assume that we're getting the whole story. And that no journalists (and too few readers) are left who actually bothered to explore what happened and write up both sides of the issue so people can get informed. [1]

Sure enough you explore just a little more and find out:

According to their own testimony, they were not the victims of "racism." They were allowed seating and offered service, it was only after they drew attention to themselves, refused to purchase, and dared the manager to call the cops, that anything happened. Isn't that the criminal definition of loitering?

Granted, it is rare that Starbucks is going to ask people to leave for not buying something. But what's not rare is that if a particular store in Philly is having loitering problems, that two of the people asked to leave might be black.

The real victim is the manager that did her job, and was thrown under the bus by the media and her own CEO, for following the rules. She likely would have bee fired if she hadn't of abided by the rules. So the asshole in this is the Starbucks CEO, who didn't even try to figure out what happened, or defend his employees against an ignorant mob. [2]

Turning Point USA's director of Urban Management (Brandon Tatum) did a pretty good takedown of Starbucks (though he goes a little over the top for me). And this isn't because he's a black Uncle-Tom sellout being a white apologists, it's about knowing enough to ask, "what would happen if the roles were reversed?" and not using a subjective scale. And that gets to the basics of conservatives versus liberals: conservatives often fall short of the standards they set for themselves. Liberals fall shorter of the standards they only set for the other side.

Starbucks has been underperforming for years. A small contributor to that is that they're acting more like a progressive-religious institution, the Church of Coffeeology. People go there to get overpriced coffee and their orders/names wrong, not for lectures on sociology. [3]

Starbucks virtue signaling went about as good as could be expected: the idiot CEO shut the store down for a day, in a completely mock-worthy indoctrination day. Then they changed their policies, "people welcomed"..... then they realized why a few stores had the no-loitering policy when their bathrooms became communal facilities for all the homeless and insane vagrants to give themselves whores baths, write their names in feces on the walls, and other fun stuff, and they rolled back the policy quietly, that anyone who wasn't a progressive could have guessed would happen before they did it.

Companies get to govern themselves how they want. And I have no problem with them being idiots, from a conceptual level. (Full disclosure: I've gone to NRA dinner with the Starbucks CIO and her Husband). So while I wish they had leadership to pick their battles better and stand up for the employees, and do something better for the world than gather the rope and torches for the lynch mobs, before the facts have come in. Thus I get a little annoyed at the volume of their stupidity. And the perpetual faux outrage of those in the progressive northwest. They seem perfectly willing to eat their own, and can't seem to understand that if you perpetually alienate half or a 1/3rd of your audience, that it's going to impact sales and growth.

So I have no problem with CEO's that want causes and to be activists on their free time. But if they do it as representatives of the company, I think they're being idiots. And there's going to be an infinite number of faux outrages and mild slights that they're going to be focused on and reacting to, instead of, you know, running their business in the interests of consumers, investors and employees (aka their jobs). So I say good for them, they pick some causes and took a stand. I also sold all my Starbucks stock, and invested in places where the CEO's aren't self-centered grandstanders trying to lecture the world on how to live our lives.