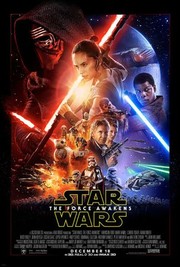 This movie seems to be a vehicle not only for rampant merchandising of goods by Disney, but also a vehicle for people to peddle their rants and opinions about the movie and everything else -- like cynical observations about that merchandizing, or how derivative this movie is (failing to observe that's true of 98% of what comes out of Hollywood).

Reviewers and viewers are widely happy with the film (94/91) on Rotten Tomatoes. And why not? It's a space opera, not unlike the original Star Wars film (Episode IV: a new hope).

They're both just the Wizard of Oz in space. Young person flung into unusual circumstances, must adapt to unfamiliar surroundings/events, do a travel saga, and help people they meet along the way, with the Wicked Witch of Space (and their allies), trying to capture/disrupt them on their trek. Which is derivative of Alice in Wonderland. Duh! It's all derivative. So that's not the issue, the issue is whether the dialog, story, and visuals are good enough to entertain you for 2 hours of escapism or not. And based on viewers and reviewers, it did its job.

Episode VII comes with a ton of baggage, and had to re-introduce us to the franchise, after a 10 year hiatus (35 years since they put out a good movie, and almost 40 years since the original). What are these next 3 movies going to be about? And bring us back into the story line. And it did it's job. This is not Jar-Jar Binks or a Muppet-Wars with Teddy-Bear Armies (the fluff of Episodes 6 and 1-3), this is a back to basics of Episodes 4 and 5, but with better dialog, filming, acting, and special effects. They even gave us the bonus of more political correctness with female and brown-skinned leads, and neither of them wore a bikini slave suit. Why can't you like that?

So the story goes right where you need it to, completely predictably. You can take your kids, and suffer through 22 minutes of teasers before hand. You can take your parents or a date and forget about everything else for 135 minutes.

And you can listen to the endless battle of Fandom and Politicos trying to make it into much more than it is. Which is just a movie.

Sometimes a movie is just a vapid opiate for the masses

This isn't that hard. Sometimes a movie is just an opiate for the masses, with nothing more to say than "pay me to forget about the world for a couple hours", and to give you something to talk about and relate to with your kids and neighbors over.

So lighten up, sit back, and just enjoy the show.