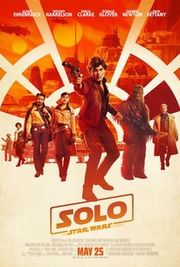 Solo: A Star Wars Story is a prequel about the Star Wars character Han Solo (in case you've been hiding under a rock or something). Like Rogue One, this is a stand alone story about events prior to "A New Hope" (the original) -- and this tells about the early adventures of Han Solo, Chewbacca, and Lando Calrissian, and their caper heists within the criminal underworld of the Empire. On it's own, it's thoroughly predictable but done well enough to not be a rip-off. But for Star Wars lore, or to get the full canon, it's probably a bit better than that. And if you're a Star Wars fan, it's probably better still.

If i was rating the series in order, it would probably be Episode 3.5 (Rogue One) as my favorite, then this, then 4 (original) for starting it, 5 for good plot, then 8, 7 (a remake of Episode 4).... and then 6 (Ewok Orgy ruined the series), and the ever forgettable 1, 2, 3. So I rank it pretty high in the Star Wars movies... but I'm not a huge fan of Star Wars. It's enjoyable enough to watch and keep up -- but it has always felt too commercial and shallow, and while they were good, they were always a little short of what I wanted. I find a few SciFi TV series to be better SciFi, but you kind of have to watch it for the pop-culture references, and to be in on the jokes.

But Disney is doing a better job than Lucas was -- and Ron Howard's politics annoys me, but he's quite an accomplished director and does a good job and both making it action oriented, enough character development, without being over the top. So it's something to bring the kids to, entertaining, and simple.

It doesn't add much to Star Wars canon.... the fanbois have always argued a lot about Solo:

Since that gibberish line was thrown in the original Star Wars, and parsecs was a measure of distance (not speed), fandom invented elaborate excuses for Lucas (or his writers) not knowing basic Science Fiction -- and they invented this whole elaborate hand-waiving bullshit about how they skirted a Black Hole, then measuring distance was showing off how close to the black hole they got (thanks to his fancy navigational computer), and stuff like that. To me, that was always dumb. And while there was some notes that hinted to this from 1977, there were more notes that Solo was bullshitting. Still, that's the excuse Lucas and fans went with, and this movie wanted to cement that excuse in, by showing what had happened on that run.

In fact, while Rogue One did a lot of filling in of gaps -- Solo did more so (for Nerd Fandom): from how he got his name, to how he was a roguish sucker, to where his gun came from, winning the Ship in poker, background on Chewy, and why he shoots first. This was all like a giant fill-in-the-plot holes movie. And while it really worked for me with Rogue One, on this one it was like they tried too hard. It filled in some lore, but then trashed others (Kessel run was called a "spice" run.... but now it was about fuel? And so on). It was OK. I liked some points, was irritated by others. But overthinking Star Wars, is like getting into an argument with 5th graders on relativity: you're wasting time.

Star Wars has always been popcorn entertainment for me -- nothing great, but enjoyable. This one fits into that fold. But it does the genre well enough that I'd say if you were going to see 4 movies to get the gist, it should be 3.5, Solo, IV (New Hope) and V (Empire Strikes Back), and then consider the Series over. 1, 2 and 3 were wastes of space. And 7, 8 and 9 might make a reasonable sequel, but I'm waiting for the final one to decide. So I went in with mediocre expectations, and it hit them on the mark. Good enough.