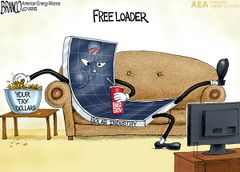 There centralized (big plant) or distributed (residential) solar power, with goals of targets or residential use. They all have different issues. While I like the idea of residential Solar Power and people not being dependent on government regulated grids, and having the ability to survive in case of natural or man made disasters, and I plan on adding it to my next home, what I don't like is lies (flim-flam), about how much Solar Power costs, or the bullshit about how "green" it is. It is not as green as the proponents pretend, and if it was cheaper, how come places that implement it at scale have higher energy costs and less reliability? Someday, it might be ready (and that may be coming in a few short years or decades), but the point is that means they've been lying for the last 30 that it had already reached cross-over. Here's some of the lies.

If Solar was cheaper, then it wouldn't need subsidies to get people to buy it. Anyone could see that the benefits would outweigh the costs without them, and there would be widespread adoption. In other words, the fact that you have to subsidize it to get people to buy it, is proof that the economics aren't there to do it without subsidies. So while residential solar can make sense for individual, in high energy cost states and factoring in subsidies, that's not because Solar is ACTUALLY cheaper. It's that under the fake economics of a regulator state, it might appear cheaper. Those aren't the same things. Solar Roads -

Around 2007 there was a ton of hype about the greatest new path to Green Utopia: Solar Roads. Imagine if the roads were solar panels, producing more power than they consumed? You could capture all that wasted space for low-energy solar power, and it would be great. The detractors warned that it'd be a disaster: too expensive, it would wear out, dirt would decrease efficiency, slick surface and roadways aren't a good mix, and a dozen other reasons it was a bad idea (theft, vandalism, etc). It was tried privately in small scale (like in Idaho) and was a disaster. But police states in Europe (France) and China, built a few larger scale one anyways, and they were exactly as the Greens denied and those with a clue warned, a bad fucking idea from the top to bottom. The point isn't that it was a good idea that didn't really work -- it was a bad idea that you couldn't reason with the left/Greens on, and they wasted many millions (or billions) trying to prove common sense wrong. Something to keep in mind when thinking about greens. Solar Hidden Costs -

With most power plants you have a pretty simple equation, the simplified version would be: Base energy costs = infrastructure costs + fuel + maintenance. With solar the true equation would be: Base energy costs = costs of solar + overcapacity + storage + backup power plant for when you have two cloudy days in a row. Since there's almost no way the math of A+B < B alone, solar + backup plant will always drive up energy costs over the backup plant alone. But the flim-flammers will omit those problems of Solar, and attack anyone that points it out. Which explains why every city/state/country that adds Solar capacity, also drives up their costs of electricity -- and why the Solar proponents are so shrill and vitriolic towards anyone that points this out. Solar Energy Return - Swiss study finds solar (photovoltaics) consumes more energy to produce than its lifetime energy production, with an ERoEI of 0.8. Unless it's a remote telephone on a hiking trail or a blinking buoy, solar is a joke. ~ Peter St Onge 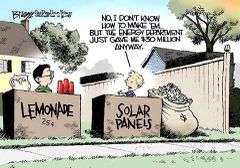 The "it's cheaper" argument falls on its face, on the individual transactions, but more so at scale. (They're losing money with every kilowatt, but trying to make it up in volume).

If Solar is cheaper then when you look at costs per/KWh, there should be a nice correlation in price to reflect the savings. But the inverse is close to the truth. Italy ($.21), Germany ($.31), Spain ($.23), Denmark ($.31), France ($.17). and U.S. ($.12). [2] Wait, that's the exact opposite of proof that solar drives down costs. Of course some of that is because Solar is such an anemic percent of their electric generation, and some is because of taxes. And the reason why energy taxes are higher, is to subsidize the cost of building all that solar (and other "renewables). So France has cheaper electricity than its neighbors, not just because of less Solar, but because so much more of their electricity is generated by Nuclear or other power. Also, because of their higher population densities, their distribution systems should make their energy much cheaper than ours -- but yet, it is more expensive.

Total renewable energy consumption by country: Italy (17% - mostly hydroelectric ), Germany (34% - mostly wind), Spain (43% - mostly wind), Denmark (57% - virtually all wind), France (20% - mostly hydroelectric). and U.S. (12% - mostly biofuel/biomass)[3]. Are you noticing that Solar isn't the top renewable energy in any country, even ones that are heavily invested in renewables? Are you saying all of them are choosing more expensive (and often less reliable) wind? Of course hydroelectric and bio-forms are both more reliable, which is why the U.S. and others pick them first. But that too belies the whole myth that solar is cheaper.

NOTE: One of the many reasons the Europeans are so ignorant about energy prices is because some of it is hidden from them. Like in Germany (and elsewhere) they are income taxed to death, and some of that tax goes into subsidizing their own consumer electricity costs. So their bills they see have price/rate caps (for some people), to make it look like they're paying less. But as a country, they're paying it, just out of their taxes/paychecks and not on their bills. It's anti-transparency in government, also called Socialism.

Not only that, but this whole correlation between energy costs and solar, correlates not only internationally, but intra-nationally (it varies by state). While the national average is about $.12/KWh nationally, in free America like Louisiana it is $.07-09, Idaho $.08-.10, Texas $.09-.11, it's cheaper. And in places that put in force fake cap-and-trade and/or state solar subsidies like California is $.16-.18, Connecticut $.18-.21, Hawaii $.26-.29 -- basically, doubling the price to subsidize their solar (and renewables). [4]

There's also a secondary flim-flam going on in California (and states like it). Cali loves to cut its domestic production and go renewable (like Solar), so they get to claim they're greener based on how much of their domestic energy is produced by green technologies. But the truth is they then reduced base capacity. When the days are cloudy or not windy, what do they do? They buy electricity from states further away (often running oil or coal). The truth is they replaced local NG or Nuclear, etc., with remote coal/oil (at least part of the time), which doesn't average out to be nearly as green as their voters/rubes think it is. And they have to pay a premium to ship in power from other states when theirs isn't working. All this jacks up the prices to California consumers, and increases the actual total pollution or CO2 per KWh (at least part of the time). But since it exported that pollution (CO2) to other states, and their base is gullible enough that they don't understand that they've been had, it's still a win for the politicians or the green-energy kooks that care about their religion more than the math, logic or economics of what's really happening.

NOTE: There's another gotcha game going on -- renewable energy drives up the costs of regular energy, to make the difference seem smaller than it really is.

Since creating a peak power plant encroached on the reliable (NG) plants sales cycle, that means the cost of maintenance and operations for the NG plant is higher, and they have to pass that on to consumers. Even if waste electricity is still being produced. Solar raised the price of operations or electricity from the NG plant, by not being reliable. The NG plant is still burning CO2, just the electricity isn't being used (or is being captured in storage, which is less efficient than using it is).

There's a little more nuance, in that you can build a fast spool plant, and bring it up/down quicker (called a Peaking Power Plant) -- but that's still new infrastructure to replace perfectly good infrastructure you already had. And fast spool plants run less efficiently. Whether you use Base load, Peaking or Load Following Power Plants, either way building two plants to replace one (or using one at less than full capacity) is a waste -- and required so that it can backup the Solar plant. Any of which cost you in money, time, CO2, pollution, and you don't really come out ahead (or much less than was promised). But if the politicians and polemics duped the gullible rubes into thinking they did something for the environment, and you get to jack up their prices for the privilege of being green, that's what really counts, isn't it?

Whenever the advocates claim how much cheaper solar is, I ask them to show their work. I can be convinced... show me the math that shows where Solar + Batteries + backup plant (sans subsidies) is cheaper than just the backup plant + fuel costs (per KWh), and I’m all ears. But to date, no one has been willing to do so.

To be fair, I've only been trying to find an honest solar power advocate since Jimmy Carter first got enamored with Solar during the oil crisis in the 1970's. I can't even find one that will admit any point against them without changing the topic. But if they can't do that, they prove they're not yet up for a big-boy discussion on the topic.

If Solar was so great, then why don't governments buy into the hype and invest into it more, for all those savings? The biggest countries are at 7%, and that's because Italy has less industry than say Germany (6.5%) or France (1.6%).

So the emotions and dishonesty of the Solar advocates make me want to spoon feed them their medicine (called math/logic) until they grow. Face it, if you have to lie for a cause and you can't admit uncomfortable truths, then you just don’t have a good cause. (Or you're not a good person).