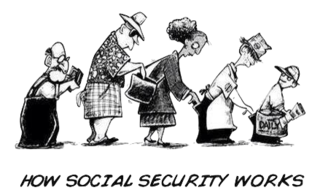 Instead of helping people to save for their retirement and creating a program where they owned what they saved, we created Social Security. That youth-tax Ponzi-scheme taught people to not plan for their future (trust government): turned people into dependents, and Americans savings went down. Americans save less than about any other society in the world - why should they? The government will take care of them. So many are far worse off today than they would have been had there been nothing but empty promises, backed by inflation devaluing the returns in their golden years. Imagine if we’d taught society to take responsibility for their own retirement? SS has even helped break down the family bonds since people don't have to care for parents or grandparents and think "that is governments job”.

If you let the govt. just take you money from you, and give it back to you at a later date you will have security. Not Senior citizens live under the constant threat of having their livelihood dramatically altered (no security).

It was set up to HELP people save for their retirement... but what is the effect?

What they are learning now is how to be a leech off of society, and bankrupt the young, and not give their children the same chance at prosperity that they had). So the program grew, the problem got worse, and it costs the nation a fortune.

To give you a taste of the real world

If you saved the same money (≈$250+ a month) and put it into mutual funds, some stocks, some gold, some saving, etc. (helping to stimulate the economy), with compounded interest you would will easily have over $1 million by the time you retire. That's an annuity of $6K/month (twice Social Security), that money was being used to help investments (America grow), and when you died you would have the original $1M to leave your kids/charity.

This is not even taking into account the MORAL argument of should the govt. be allowed to TAKE money from you, because IT thinks that it is in your best interests.

I know I am better at managing my money that the govt. is. Progressives think they know more than you. But the whole point is, 'IT IS MY MONEY' to do with as I choose, even if I choose wrong. It is NOT the govts. or progressives money.