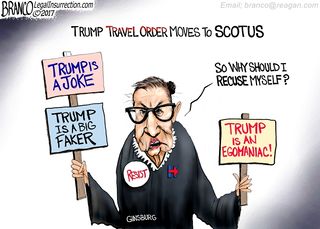 The infamous RBG. Single handedly dividing and polarizing us, and demonstrating how not to be a Supreme Court Justice. She's like the Rose Bird of the federal court, putting her own interests and political agenda above the law. At her confirmation she swore under oath that she was neither a Democrat or Republican, yet she has been the most consistently far-left DNC supporter once on the bench, proving the truism that Democrats lie. While I don't wish harm on anyone, when she dies, the Supreme Court will get a lot better.

Here's a few of RBG's worst: either most partisan, least legally established (most activist), or just poor judgement as a human (as well as a judge) sort of things:RBG : 7 items

American Legion v. American Humanist Assn. - 1925 Bladensburg ‘Peace Cross’ can stay on public land ruling. This was a win for freedom of religion: a cross is often a secular display and even if it wasn't, respecting a religion (and a tradition) is not the same as promoting it, nor a violation of separation of Church and State. Naturally Ginsburg and Sotomayor took the progressive/anti-Liberty position. 2020.09.18 RIP RBG -

I don't wish harm on anyone, but for jurisprudence reasons, I'm glad that RBG passed. She might have been a nice person, but there are lots of nice people that shouldn’t be on the Supreme Court. She was on the wrong side of virtually all the worst rulings during her tenure. Her selfish nature was demonstrated by not stepping down during Obama, but holding out expecting a Hillary win. And her divisiveness was displayed if her final wishes were as NPR reported that we should ignore the Constitutional power granted to the Senate, and hold out until after the election to appoint a replacement for her. The nation has the chance to become a much better place (as far as jurisprudence/lawfulness) with her no longer on the court. It would be great if they could replace her quickly with someone who actually values the Constitution as written, instead of as rewritten by the far-left's imagination. 2018.08.26 Forgot the 14th Amendment - Do I think it's unusual for a career jurist (such a RBG) to Forget the 14th Amendment to the Constitution, in a prepared talk? And not be able to find the document she's claimed she always has with her? A little inept. But she is an octogenarian who seems to prefer the South American Constitution to our own. But does anyone reasonable doubt that the media would been all over such a gaff, if it had been a conservative jurist: for the racist, lack of professionalism, or cries of senility? 2018.07.12 Kavanaugh or RBG - NYT had a snotty tone when intro'ing Brett Kavanaugh's and his record of "diversity". They mentioning the Women, and omitted the other minorities: 6 Asian Americans, 5 African American, and 2 Hispanics. They also omitted that Nefarious RBG has a far worse record for diversity, as that's the bar they would compare everyone to. 2018.02.12 Trump Rants - To show her senility (or lack of judgement) runs deeper than her rulings, she openly made hostile statements about a Presidential candidate and her favoritism for the other. Foolish. Her apologists claimed those criticizing her, were attacking her free speech rights -- but that's not the case, they were attacking her judgement in not exercising her right to remain silent. Most intelligent and thoughtful jurists didn't opine on politics is because when they do, they either need to recuse themselves a lot, or they lose the public trust on rulings on cases where they've shown to have a strong political bias. RBG might have lost that trust long ago, but this doesn't help her standing in any way. 2012.02.06 South African Constitution - While discussing Egypt's Constitution, she advocated using the South African Constitution as a better model than the U.S. Constitution. A cluster fuck of Social Justice that allows injustice, racism, outlaws capital punishment but not abortion, open borders, a universal healthcare. It's a great compendium of liberal causes, but lousy fucking law, with no flexibility unless it is ignored: which it is, as it must be. 2009.07.15 Eugenics support - Supreme Court Justice Ruth Bader Ginsburg said in Sunday’s New York Times Magazine: “Frankly I had thought that at the time [Roe v. Wade] was decided... there was concern about population growth and particularly growth in populations that we don’t want to have too many of.” The comment, which bizarrely elicited no follow-up from interviewer Bazelon or any further coverage from the New York Times — or any other major news outlet — was in the context of Medicaid funding for abortion. (FakeNews is not reporting both sides equally).

I'm not a fan of legislation for things that we wouldn't ruin or end lives over (where laws ultimately end up). Plus, it's like a litmus test for worthiness. Ginsberg is free to show how disaqualified she is to be a rational jurist. Thus history gets to mark her, and her allies, by their actions. Suppressing that gives her future supporters more plausible deniability as to what an embarrassing polemic she's become.