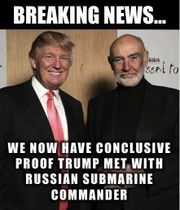 There was like $6.8B spent on the election versus you have like $50,000 spent on a few troll ads on FB-- most of them were before/during the primaries (or after the election) and they were spent on things the Democrats usually support (Black Lives Matter, anti-America, anti-interventionism, etc). All things the Democrats support. They weren't campaigning for Trump, they were slamming everything, or trying to insight unrest, and undermine confidence in everything.

So when someone claims the Russians swung the election because of their Facebook ad spending, they are claiming that a few Russian trolls throwing random shit-memes are 68,000 times more effective in their ad spends than the entire American political system at swaying voters? If so, then they deserve to win.

Is there anyone dumb enough that knows the numbers/scale and still thinks that FB was able to influence the election in Trumps favor?

The media is acting like there's some big scandal around Facebook allowing a micro-fraction of their ads, or some fake accounts, impacted the 2016 election. It's all garbage:

So this is flim-flamming excuses by her troll army, or those unwilling to admit that she was just a bad candidate.

Hillary started the fake Russia thing via Pete Brognitz (June 2015) -- because polling showed her top weakness was on Uranium One (20% of Uranium) and colluding with the Russians. So their defense was to claim the other side did it too/first/etc., to distract/weaken the attack against her. Podesta emails proved it. This is Hillary's usual gaslighting tactic. [1] And the whole thing HELPS the Russians.

This is the message as the DNC and BLM. Thus the Russians ad buy was economically and politically irrelevant -- and it was targeted towards Hillary's causes more than Trump's. So much for that collusion theory. That was what the media and Facebook did, with this whole Russian trolls/ads thing -- them sensationalizing either BLM, DNC and other progressive talking point (saying the same things as the Russians wanted), made a far bigger impact. So which is it? Should we care and get pissed at FB/Media/DNC? Or should we not care, and they're all fools, frauds and liars? Pick one.

What were the ads about? You never hear those facts in the mainstream media. Why? Because it blows apart their narrative.

The ads run were mostly to amplify political discord and fuel an atmosphere of incivility and chaos. In other words, the DNC platform.

So the ads run by the Russians were mostly supporting Democrat agenda, like running BLM ads on Facebook in Ferguson and Baltimore. How is sending the same message as the DNC was, trying to promote the anti-American ideas that we're a racist country, that the government abuses its people and thus we need more government, and other things that are part of the DNC platform, undermining Hillary or helping Donald Trump?