From iGeek
(Redirected from Roy Moore)
Jump to: navigation, search 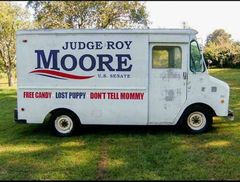 Roy Moore was the Republican nominee in Alabama for a contested U.S. Senate seat, had run multiple campaigns for decades (with nothing coming to light). The left hates him with a blind seething passion for his positions against Gay Marriage, and for the 10 commandments, and for switching from their party. So WaPo timed a hit piece to do the most damage it could to him, and to help the DNC. I wouldn't vote for a Judge that puts his ego above the law (as it appears Moore has), but the important question is whether the allegations are true, or just true enough for WaPo's quality standards.

Leigh Corfman - The accusation is that in early 1979 a 32-year-old assistant district attorney (Roy Moore), came up and introduced himself in the park outside the courthouse to Leigh Corfman (a 14 year old) and her mother, and offered to "watch the girl while her mother went inside for a child custody hearing". From that, he got Leigh's phone number and called her on her bedroom phone and asked her on multiple clandestine dates, that proceeded to light petting (over the clothes). And without any details, abruptly broke off a relationship that a pedophile would have probably thought was progressing nicely. There seems to be holes in the story, and no ability to corroborate any of it other than her mother did attended a hearing at the courthouse in February 1979 (according to divorce records), and Leigh has a friend that says she remembers hearing the story back when they were teens.

I have no idea of Roy Moore is guilty or not. And I'm not particularly interested in defending someone's integrity I don't know (the same for Leigh), but I wanted to know more about the accuser, the peculiarity of the article timing (in a publication that hates Republicans in general, and supports Roy's opponent in particular), and so on. Turns out, Leigh is divorced three times, filed for bankruptcy three times and has reportedly “claimed several pastors at various churches made sexual advances at her.” She certainly seems to be a magnet for this kinda stuff. She claims she never came forward in the last 30+ years, because of her troubled youth (promiscuity, drugs, etc) and didn't think anyone would believe her. Her Mom claims she never had a phone in her room, so at least that part of the story was wrong (while she corroborates some others). While Moore strongly denies Corfman’s claims.

Wendy Miller says she was 16 when Roy asked her on dates, which her mother forbade. OK. Creepy, if true, but I'm not see a crime. (There's some allegations that he met her when she was 14 and working as a Santa’s helper at the Gadsden Mall). Again, potentially creepy, but no crime.

Deborah Wesson Gibson mentioned far milder accusations that Roy Moore asked her to go out when she was 17, and they kissed. Washington Post failed to disclose she worked as a sign language interpreter for Hillary Clinton and Joe Biden, and is a volunteer for Roy's opponent in this race. She later came forward with some uncorroborated evidence (notes, etc). Dating and kissing a teen is creepy, in a Jerry Seinfeld kinda way. But the age of consent in Alabama is 16, kissing is just creepy, not a crime. [1]

Gloria Thacker Deason says she was an 18-year-old cheerleader when Moore began taking her on dates that included bottles of Mateus Rosé wine. The legal drinking age in Alabama was 19. Nothing beyond kissing happened.

Tina Johnson - came forward and said that Roy Moore grabbed her ass while she was leaving his law office after signing papers to give up custody of her 12-year-old son to her mother. She was a 28 year woman, going through a divorce, and this was 10+ years after the other accusations: long after Moore was married. Johnson was convicted of writing bad checks and third-degree theft, and this is a different pattern of behavior than predation on teens. [7]

Kelly Harrison Thorp - who is a long time friend of Leigh Corfman claims in 1982 when she was 17 years old, hostessing at the Red Lobster, that Roy asked her out, well knowing her age, and that he quipped he went out with girls her age, all the time. She also commented that she was proud of Leigh for coming forward with her story.[8] 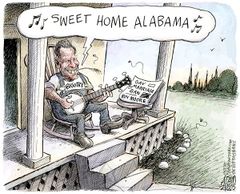 Remember the context, WaPo had nothing bad to say about "Friend of Cosby", 38 year old Jerry Seinfeld dating 17 year old Shoshanna Lonstein. They mention her as a college student, or dodge the age issue. Nor was curious about their relationship enough to often mention the age difference that was greater than Moore's. [9]

And as long as we're remembering what WaPo left out of this story, it's things like Roy was a registered Democrat when all this happened. So it's interesting that the behavior was fine to the Democrats when he was registered (D), but was only worth investigating after he switched to Republican. I guess that's one thing both the left and right can agree on, creepy Republicans should get fired, even if it's been 40 years. But rapey Democrats should be defended, even when the wounds are far fresher. [10]

The point isn't whether I find that big an age difference creepy, I do. I just care more about the moral inconsistency places like WaPo and their followers have towards those with an (R) versus a (D) after their name. Jerry is "one of the good guys", so always got a pass. Moore as a Democrat always got a pass. Now that he is a conservative, so it's just "journalism" to put multiple muckrakers trying to dig up 40 year old dirt, and write about it in the most sensational tones, dropped at the most opportune time (if they work for the DNC). In the mean time, there's a trial of Menendez going on, where a Democrat had sex with underage prostitutes, and it's getting no press at all.

The evidence against Moore, is basically 3 girls saying he liked dating 'em young but legal (one of those was a democrat operative). One alleging rape, that's highly sketchy and people close to her are claiming she's lying. And another democrat operative with a history of fraud says that he might have offered her wine a few weeks before her birthday that made it legal. All of these happened in the far more distant path than Al Gore or Bill Clinton's sexual allegations that the Democrats had no problems with, and are nowhere near as bad. So of the reasons I wouldn't vote for Moore, this doesn't crack the top 10. How he handled it (poorly) weighs more heavily on me, than 30+ years old, he might have followed Alabama tradition and tried to date 'em young and impressionable.

Moore, now 70, says, "these allegations are completely false and are a desperate political attack by the National Democrat Party and the Washington Post on this campaign”. Meanwhile the media has used the Roy Moore story to block out the more serious allegations and the trial of Menendez[11].

The GOP leadership does not want Roy in the Senate, and are perfectly willing to throw him under the bus. And it’s not because of these allegations alone, it’s because of his conservatism and his opposition to Senate Majority Leader Mitch McConnell (establishment).