As Swedish economist Assar Lindbeck one said, "rent control appears to be the most efficient technique presently known to destroy a city – except for bombing". I think he was understating it. Rent control, like all other price and wage control proves that you can control the prices, but not the unintended consequences of controlling the prices, and it makes things worse, virtually everywhere it has been tried. It is the idea that if you help one person, at a cost to many others, that you can come out ahead in the long run. It never works (long term).

Of course the sane and informed know that forcing one customer to pay less than everyone else, is not only unfair, but it means that the landlord either jacks up everyone else's rates to make up for it, or the lower returns means that there's less development and investment goes to other places that don't have that burden on investment. But people who can count to three without using their fingers are not the base that is attracted to rent control -- it's more the progressives, kids and just plain economically ignorant that think you can help one person by hurting many others. 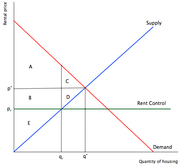 This is not unique to rent control, all price controls end it disaster. There's 3 ways to set the price: (a) too low (b) too high (c) just right. Too high means it didn't help anyone because it didn't matter (it's above the going rate). Too low means that it suppresses supply and then you get long lines. And just right is a fantasy that you can never hit everywhere in a city or nation at once, and even if you could hit it for a nanosecond would be invalid because the price set by bureaucrats will never float fast enough with real changes in the market. To quote Cato, "When the federal government restricted gasoline price increases in the 1970s, long lines formed at gas stations and only those motorists who waited long hours in line received the scarce gasoline"[1]

Many countries that had wide rent controls: (France, Vietnam, the United Kingdom), had to eliminate their rent control policies, and the results were things got much better. But overhwelming evidence will never convince provencial progressives in places like NYC, SF, San Jose, or Seattle.