Q: Is Trump compromised by Russians? 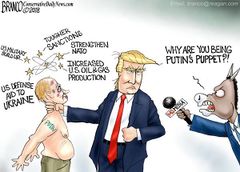 A: Only the irrational can believe that. Anyone that says that is either a partisan, uninformed or a TDS (Trump Derangement Syndrome Sufferer). Despite almost 2 years of investigating, there's no evidence of Trump's direct contact with the Russians. We have hard evidence of both Obama and Hillary having direct contact with the Russians (and getting payoffs). And when you look at policies, Trump is crushing the feckless Obama/Hillary administration in actions that hurt Russia. If Donald Trump was compromised, don't you think the Russians would have some leverage and use it?

Think about how stupid the "Trump=Russian Puppet" argument is, Russians wanted Trump to win, so he could be stronger on domestic policy, tighten our border security, he'd increase our economy and use that to get more global influence on international fair trade. Russia's economy is 40% dependent on oil, so they'd want an American President who would up our oil and coal production to undercut them. They wanted him to strengthen NATO's defense and resolve, put missile defense in Poland, increase our military spending (and Nuclear program) and create a Space Force? Or eliminate ISIS, let the world know he wouldn't tolerate chemical weapons, kill Russians that got in his way in Syria. Then give weapons to Ukraine, and shame Germany for their dependence on Russian Natural Gas (and push a trade-deal where they would get more NG from the U.S. and less from Russia). It's dumb to think that the Russians wanted Trump to win, but even Alex Jones isn't bat shit crazy enough to float the regular CNN/MSNBC conspiracies that Russians are controlling Trump, and he's giving them what he wants.

Then there was sanctions. Trump has slapped sanctions on Russian businesses and individuals, including government officials and even several personal friends of Putin, including the Countering America's Adversaries Through Sanctions Act. There's a bit of grey, as Trump criticized parts of the law (for encroaching on Presidential powers), and that the same congress couldn't fix healthcare, but he didn't veto it, or fight it with a gusto. So if he was a puppet, you'd expect a lot more than that. 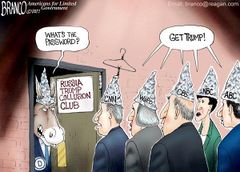 If Trump was a Russian agent, shouldn't we have much more than some weak contacts to some of the people in his campaign, who were often fired early? Unlike deals closed by Hillary and Obama. And if he's a Russian asset, don't we think we'd see some evidence of it? The evidence we have is of the Hillary campaign conspiring to invent the excuse for why she lost, was because, "Russia", and her lapdogs in the media went where she pointed. That's far more plausible and far more evidence than of Trump being a Russian operative. But to conspiracy kooks on the left, that want to believe Trump is Satan, it's easier to believe that he's a Russian agent, than common sense and all the evidence that he is not. The first step of correcting a problem, is admitting you have one. Those that repeat Trump is compromised, and can't admit they have a problem, should be institutionalized for their and the public's safety. (And there just went the staff of MSNBC and CNN to the looney bin).