Q: Did the Russians want Donald Trump to win?

Q: Did the Russians want Donald Trump to win? 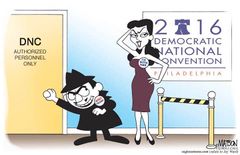 A: there's no evidence of that. - no one (least of all "intelligence sources") ever provided a good motive for why Russia would want Trump over Hillary. Hillary had a history of being more bribable and blackmail-able, so if they wanted a puppet or someone they could compromise, they had their Manchurian candidate in her. Their $5,000 ad spends showed that Russia did what they've always done, which is support far left ideologues, like supported Bernie Sanders, SJW, Black Lives Matters. They played up issues like crime, mass shootings, lack of gun control, and that America is corrupt, even echoing the Hillary campaign (after the election) on how the election was tainted. How does repeating DNC and media talking points, support Donald Trump? The Russians undermine confidence in America to make Russia look less bad in contrast, and distract Americans on domestic problems, to keep them away from foreign interventions. The DNC does it, to try to convince them they need more Democrats and Government to fix things. So Russia and the DNC have always been aligned. (Russians refer to these Democrat supporters as "useful idiots"). This goes back to hippies, the Vietnam war movement, environmentalism, FDR, the Red Scare, and before. This time was no different.

Also remember that DNC/Hillary campaign got caught paying for far more trolls, astro-turfers, and even paid thugs to violently assault Trump supporters at his rally's. The Democrats went much further than the Russians. So if we should arrest anyone that did that, we should start with the DNC/Hillary campaign.

If Russia was spending most of their money supporting DNC causes, how can you conclude they supported Trump? The Democrats answer is that they have imaginary Kompromat (compromising material) on Trump that makes him their pawn. But if they did why would they want him making America stronger, more constitutionalist, antagonizing Europe into increasing their defense spending, putting sanctions on them, killing Russian mercenaries in Syria, and improving America's economy? If Hillary was elected, she was proven to be easy to manipulate, and would have left the status quo (which played to their advantage).

The only reason they might have wanted to attack Hillary was retaliation since she, Obama and the Democrats had interfered with the Russia and many other countries elections first[3], but the media has mostly avoided covering that angle in this scandal because it cedes the non-existent moral high ground.

Russia seems to have done what they've always done, which is spin things on RT, fund a few far left outlets, do a few ad buys (under a false flag), troll, and basically magnify the far-left's message. Any dirt that comes out against the forerunner, helps inject moral ambiguity or futile-ism into the public (if they win). A small part of Russian trolling was against the front-runner (Hillary), but even less was aligned with Trump than with the DNC. Thus any trashing of Hillary, is hardly proof they wanted Trump to win: it's more proof they couldn't read the polls any better than Democrats did. And that's nothing new, and nothing different was done this election than any other -- or than we do to their and other elections.