Q: Did Russia "influence" our elections?

Q: Did Russia "influence" our elections? 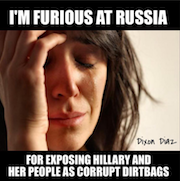 A: There's no evidence that the Russians were successful at influencing anyone. We know from polls (including exist polls), that people who voted against Hillary, or for Trump, didn’t have the leaks as any of primary motive: they had decided long before, and over other issues. They wanted a change from Obamanomics, weak foreign policy and identity politics. So even if the Russians tried, there was no discernible effect in polling.

Russians have tried to "influence" our elections for 70 years, often at the request of Democrats. Russians have always supported opposition groups from the Vietnam War, to Martin Luther King, to environmentalist movements like anti-Fracking, anti-Dakota Pipeline, or anti-humanity (the Sierra Club). All during the Obama administration and up to early 2016 (before the primary), they did some insignificant ad buys/trolling (a few thousand posts among billions, and $5K of $20B), there's a probability that they "hacked" a Hillary operatives email, and a lesser possibility that they were behind leaking those truths to Wikileaks. But that means the Russians did what the media should have done (called investigative journalism), and investigated and released evidence that the media, DNC, and Hillary campaign had conspired to sabotage Bernie Sanders, and corrupt/rig the election. Instead the media was behind collaborating to get Hillary elected. If the media had done their job, the Russians would have had no impact. If Russians had an impact, it proves the media wasn't doing their job in informing us. When the leaks came to light, the Media/Democrats first lied about it (and implied that these emails were faked), then changed the subject to "Russian Hacks" or "Trump colluded with Russia". 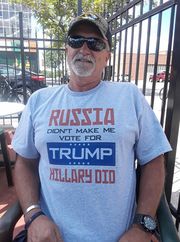 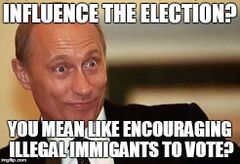 While Hillary's election loss was a shock to the media, because they were using biased polls with +11% oversampling of democrats, it wasn't a shock to those seeing Trump fill football stadiums and Hillary unable to fill meeting rooms, when she did campaign... which was less often than he did.

I had gotten into huge arguments with friends that the Polls were going to be off, I just didn't know if it would be enough for Trump to win. And I explained why. Then Trump won, and I repeated what I had been saying all of 2016 in Trump Election: Orange is the new black, and Nate Silver. So I had a couple friends unfriend me and block me on Facebook, because I was right, and the truth hurt their feelings. But ignoring the truth doesn't change it. The reason some people were surprised is because rather than think for themselves, and listen to people smarter than themselves, they listened to what the media was telling them and they believed. They built a cult around far-left ideologues like Nate Silver, because it gave them deliciously comfortable confirmation bias, instead of nasty tasting uncertainty.