Prohibition increases scarcity (and the allure of doing something naughty). Scarcity increases value. Value creates black-market (crime). Crime creates more tolerance for authoritarianism. Which all result in less freedom, and more value in whatever is prohibited. Whether alcohol prohibition, the war on drugs, or gun control -- all the illegal items were available (often more so), and once outlawed there were LESS controls on who could buy and under what conditions. 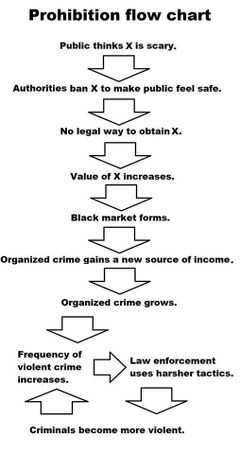 These are all facts:

Outlawing most things just make those things more profitable and seedy, and may encourage the actions. Telling someone they can't do something is sometimes a way to make them want to do it more.