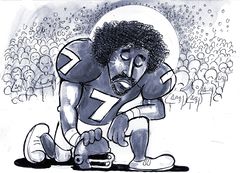 Progressives seem unhappy when anyone else is happy and not waving their flags of anti-patriotism. They see some injustice in the world (real or imagined) and they feel compelled to lecture and spoil anyone else's good time. Nothing demonstrates this more than the recent politicization of sports -- with the completely expected consequences that this alienates enough of the audience, to ruin it for everyone.

No one is saying that this is the first time sports has been politicized. From Germany Politicizing the 1936 Olympics, to terrorist massacres of Jews (11 dead) in the Munich Olympics in 1972, 1980 and American boycott of Moscow Olympics (not to mention, many boycotts before that), and so on. [1] There have always been racists, bigots and spoilers trying to shit on other people's fun, and usually the sanctimonious asshats wore the uniform of leftists or "progressives" (at least in their minds). Such is life.

But it has never ended well. It has never lead to more understanding, or support for a cause. It always polarized groups, or lead to more obnoxious stupidity. Fortunately, in domestic Sports (with a few exceptions) we generally left room for other Americans to disagree, without being too obnoxious about it. At least until Obama.

Once our Community Organizer in Chief (Obama) took over as President, and celebrated the ignorant, bigoted, racist organizations like Black Lives Matter, and their lies about how poor gentle giant black men are being shot for having their hands up, things have gotten worse. The left has been doing it's best to start a race war. Just see everything as racially motivated, incite groups like BLM to create riots and commit acts of vandalism and violence (or even murder), then excuse those wrong means as justified, and stir the pot to see what happens. The change agents imagine this will lead to change -- without having the intellectual capacity to realize that not all change is good change.

Their intolerant bigotry in the name of Social Justice, spread to the weakest minded athletes... who want to be known for something more important than playing games and entertaining people for money. 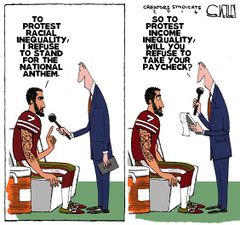 The answer was that while farting in a bathroom isn't considered rude, farting in an elevator is. Context matters.

Sports are supposed to be about entertainment and escapism, and unity (both sides rooting for other teams, but enjoying the spectacle of non-violent combat). Chiding each other over beers and hot dogs (bad, overpriced food). They are a celebration of the freedom that allows us to waste money, and be entertained.

So idiots like Colin Kaepernick bringing his own ignorance-based agenda into spitting on an American tradition, is shockingly un--welcomed by some. That isn't to say he can't express his views -- he can fart his views off the field, all he wants. But when he has his audience trapped in the elevator of opening ceremonies, is the wrong time.

But Kaepernick could have been worse 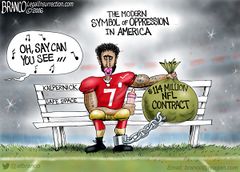 Yes, at first he sat down. But after some military veterans and others complained, he said he'd take a knee instead of sitting, as that was somehow less disrespectful. And I guess it is, if you ignore the context of him politicizing the game, and forcing his agenda on millions of Americans who are far more informed on the topics than he is. He's a millionaire paid entertainer, and instead of entertaining, he's telling the audience that they're all racists for not having the same views he does. But what does a 20 something, sheltered, millionaire, athlete know about oppression and injustice in the real world?

While that might appeal to 1/3rd the audience that agrees with him, it alienates another two thirds (who either disagree with him, or don't think this is the right place to be making that statement). So like a guy that belches loudly at a nice restaurant... yes, it could be worse, he could fart or crap himself at the table, but that doesn't mean he is polite or right to be doing that, at that venue.

But what about Tim Tebow?

Tim Tebow was detested by the left, because he expressed his views on God (by silently praying), on the field. But the differences is that honoring a tradition is different than dishonoring one. Anyone comparing the two, and ignoring that, is either a fool or fraud. Athletes have always prayed or thanked God for their accomplishments. And that's a positive giving thanks act, not pointing fingers, insulting tradition or the audience by saying, "you are racists, and I'm ashamed of my country" for an imagined slight. Then of course there's the hypocrisy of the left and media that was decrying Tebow, and wishing him ill for his display, but celebrating Tebow and clan, for giving Americans the finger over not buying into the BLM's lies.

What's this really about?

Some will lie and claim this is about free speech -- but no one has a problem with these folks protesting on their free time. The problem is that they want us to pay them, for protesting the flag, anthem and America, on time that the public is paying for them to entertain.

Of course we know what this is really about, a racists terrorist organization called Black Lives Matter.

Now I know saying the truth about the organization will trigger some. And I'm not saying that everyone in Black Lives Matter is a racist, or everything they believe is wrong. It's the 80% that give the rest a bad name. They are based on the lie that an innocent black guy was shot because of his skin color, also the lie that they care about black lives when they're being lost to other black men shooting them at 100x the rate that they're shot by cops, or that they care about the civil rights of whites that are killed at the hands of cops, in far greater numbers than blacks are, and so on. They're just a divisive, riotous, bunch of ignorant bigots, disrupting event after event for attention.

Some troll whined, "when was the last time a white guy was shot in a car for a minor pull-over?" -- I pointed out that was a couple weeks earlier, with Kevin Hoops on 9/1, in Ohio. It only made the local news in Ohio, because it didn't divide us as a nation, and feed a false narrative. And of course the prior week a couple different events in Orange County had unarmed white guys shot, but BLM has no interest in abuses against people of the wrong skin color: their cause is racism.

Deep down, might there be some softer valid points in BLM? Sure. But it's hard to dig thru the stench and hypocrisy of their foul means and methods to see them. If they weren't a far left organization, the SPLC would label them a terrorist group. But again, my point wasn't to debate the validity of BLM, it was to point out that there's many that disagree with you disrupting their sports event, to cram any agenda down their throats. But especially a racist and ignorance based on.

Trump and the Media 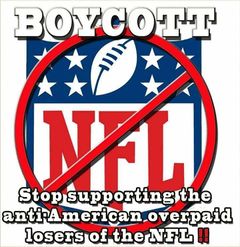 Things were bad enough when the NFL was simply putting woman beaters, animal abusers and murderers on the field. Now they put even lower low-lifes: progressive activists.

The issue was dying, it's estimated that only 10 of the players were taking the knee for the church of progressive stupidity, before Trump's attention to it. Of course it had been over a year, and still hadn't gone away, and the point of not-politicizing our sporting events was still valid. Just as is the fact that the media hates the flag and symbols of freedom or this country, longer before they conned gullible football players into anti-american displays for attention. [2]

Trump of course injected himself into this, by pointing out the truths that the NFL attendance is down, that if the owners had any respect for their audience that they'd tell their players to knock-it-the-fuck-out (or in his vernacular, threaten to "fire the sons of bitches"), and of course, since Trump said it, the DNC-Media jumped on the other side, and screamed it was a free speech issue, and how wrong he was to get involved, and other histrionics.

It's amazing that the same Press and Left who had nothing but fawning worship over Obama injecting himself in everything from self-defense shootings to basketball picks, suddenly thinks the President should mind his own business, when it comes to millionaire athletes disrespecting the flag, sport and country. I keep asking for a guidebook of standards from the left, but their standards are still: democrats=good, republicans=bad, no matter what the issue.

I happen to dislike Trump jumping into every issue, for the same reason I was annoyed when Obama jumped on every issue half informed and made things worse. I don't want any President to do that, even when I agree with what he's said (like in this case). So if the Press would shut-up, I'd be annoyed at Trump.

But instead they go so over the top with stupidity, that I'm more annoyed at them than Trump:

And the NFL is picking the losing side on this.

This whole mess is created by the left. They just can't stand people enjoying a sport without injecting their cause into everything.

This started under Obama, and because of Obama's support of BLM and divisive identity politics polarized Americans when asshats started politicizing their entertainment more than Hollywood already had. It has been festering for years. And the lash of BLM's intolerance (towards those not in solidarity with them), causes the backlash of pissed off viewers, and retaliation.

Trump tapped into that, by exposing the hypocrites, and pointing out that millionaires shouldn't spit on their audience who go to games for fun -- not for silent shaming from clueless SJW's. Some people just want to watch a game, and have their side's views be treated with the same respect that the contemptuous, disrespectful trolls demand for their special interests (while showing contempt for everyone else's views).

I think the same thing about businesses and CEO's. Pick your battles wisely. If there's a real civil rights issue, sure, get involved. But if this is disagreements in nuanced degrees over some injustices by cops that happen to people of all colors, and one special interest is screaming that their plight is worse than others (despite numbers to the contrary), then you might not want to alienate a large part of your audience to get involved. Let it play out in the court of public opinion, and not on your stage.

Trump tapped into a sentiment of his side. But it wouldn't even be a sentiment, if the other side hadn't started it.