Are you out of your phreaking minds?

Phreaking is when people (hackers) figure out how to break the phone companies security, to get access to control the phones. Most often used to make free phone calls, or get operator powers. Network hacking is breaking in (usually looking around without doing harm). Cracking is defeating copy protection in someone else's code. But there is far less moral ambiguity about phreaking -- almost all phreaks get free phone calls, and that is something the law (and the phone company) frowned upon -- seriously. The phone company dedicated resources to countering phreaking, and hunting down phreaks. It became the blackest of the black computer "arts", and through improvements in security, and commoditization of long distance phone call costs, it largely doesn't exist any more.

People don't realize how primitive telephone technology was (and still is some places). The basics were that it is two wires with speaker and microphone attached. The phone company switches were "crossbars" and relays -- just ways to connect two wires together, then figure out how to bill when you "picked up" the receiver. The most basic phreak was as follows. Make a wiretap (called a beige box) -- which can be two alligator clips with the wires connected to a high efficiency speaker (an amp in between is optional, but better quality). Connect it to a phone line. Sound hard? It isn't. When you dial a friend (or have him call you) with both of you having the taps connected you can talk without being billed as long as you don't actually answer the phone. On older phones if you didn't answer the phone (pick the handset up) you didn't start paying -- but the connection is already made (it would just keep sending pulses to "ring" the phone until you picked up). So you can talk between the rings (pulses). Free phone calls. If you use it, it is probably a felony.

There are some more high tech solutions that will block the ringer and convince the phone system that you haven't answered yet (a Black Box) -- but this was the basics. This technique only works in rural areas anymore (on older phone switches) -- but when I was a kid it was not yet "plugged up" as an option. Of course every geeky kid that learned about this often felt a compelling urge to try it -- which annoyed the phone company. Of course wiretaps (beige or tan boxes) can be quite useful to this day (ask Linda Tripp). I bugged our phone at home as a teen (something my parent learned about years later) and it proved quite useful without phreaking the phone company.

The most common phreaking (when I was around) was the ancient equivalent to "cell phone cloning" (which may be a modern form of phreaking). It was hacking sprint codes (or the passwords/numbers of any of the business truncs or long distance services). Basically you set your computer up an night to dial a sprint-code (or other phone company phone code) -- then dial through. If you got a "ring" then it was good number and you printed it out, if not you tried the next number in the sequences. If you left your computer on all night it could get a few pages of valid codes. Then you could use those codes to call long distance and stick someone else with the bill. The owners of your codes would complain when they got 4 hours to where ever you called -- and the phone company would clear the item. So many felt they weren't really hurting an individual, and since the phone lines are there, why not use them? Of course it was ILLEGAL! Not to mention immoral -- but it was still somewhat a game.

Of course the phone companies got smarter. They tried to block these techniques. They would put in dummy numbers -- numbers that were valid but "flagged". They couldn't trace the source of the call(back then), but they could log who you called. So they would call that person as soon as you hung up, and ask, "who just called". If they got the number of the source (you), they'd call you up and threaten to stick you with the bill and so on. That turned out to be an effective way to scare many straight. They actually did this to a friend and scared him straight (which wasn't a bad thing). But that technique only worked if you were calling people. Most calls were being done to cross country BBS's (Bulletin Board Systems) -- and it is hard to ask a modem who just called. Plus if the recipient of the Phreaked call knew what was going on, they could just say that there was a party going on, and they had no idea who had just called -- or impolitely tell the phone company what they could do to themselves. The phone companies also tried to use other techniques too. They would look for patterns of numbers (in hacking) to try to detect if someone was walking through a sequence (phreaking). Phreaks figured that one out, and just used large tables of hundreds of numbers in a scrambled order so the phone companies couldn't see a pattern (in stepping through that sequence) -- yet all valid numbers would still get checked. There was the "move" and "counter-move" aspects of the game. There were many other hardware and software "get arounds" to mess with the phones. It was another "wits" game -- with the phreaks having fun and exploring, and the phone company being deadly serious (and VERY pissed off). Eventually the Phone Companies (TelCo's) changed the whole telephone switching systems in cities (and how they worked) to a system call ESS, which made most hardware phreaking a lot harder. The long distance companies increased the password lengths on sprint codes to many more digits, and more sophisticate ways of back-tracing the callers. They both had people arrested for crimes -- and many others took the hint. I imagine the phone companies have most of the holes pretty plugged by now. 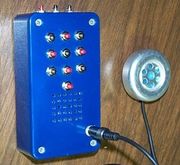 Now the most common kind of phone phreaking was messing with phone company hardware (or knowing what the phone company did). Each technique or piece of hardware was given a color/name. Here are the basics of the different phreaks.

Beyond here are the more exotic boxes, or just naming any unauthorized phone modification with this color code.

There were a few malicious techniques, meant to do nothing other than harm other people (or their phones). The dirty tricks of the phreak world.

Phreaks took pride in being the worst spellers on the planet, and intentionally changed all 'f' to 'ph's and vise versa. It was part of the counterculture to spell everything phonetically, because on phones it really didn't matter. I think this was the start of the hacker spelling games where they play with caps and symols in thier handles, "hAcKer$", they borrowed it from the phreaks.

So now you have the basics of what was being done in the Phreaking world. Phreaking your own phones wasn't really the criminal stuff -- it was phreaking to get free calls (called phone-fraud) that would get you in serious trouble (if caught). But it was very very hard to get caught -- and people knew it. There was about .0001% that were actually prosecuted, so it was hard to convince them that it was dangerous or wrong. They thought that not getting caught, and just borrowing the phone companies phones was not that big a deal -- like pirates think borrowing other peoples software doesn't hurt anyone. I have no idea how many active phreaks are left. I know it got more popular in other countries (and rural areas) where the telephone systems are older (and more susceptible) -- but I think it has died down a lot in the U.S.

Phreaking evolved more into hacking into telephone company computers, cellular's (and radio) and less of the hardware hacking that was most phreaking during the 70's and 80's. The Internet did a double-whammy, and eliminated much of the hackers/crackers need for phreaking (since people didn't need long distance to access BBS's), and it also eliminated the need for long distance to talk to their friends since they could use point-to-point voice chats across the Internet as well. So I think phreaking is definitely a dying (criminal) art -- and may even be a dead art. The phone companies got much wiser because phreaks helped teach them the flaws, and they improved their phone systems and added many more services as well -- but wouldn't you know it, the phone company has no appreciation of all that help.