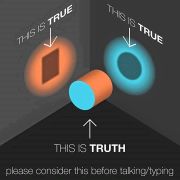 There's these different meme's about perspective -- and some are true, some aren't (or are true to only a point). Yes, what angle you look at an issue, can alter what you see. But that doesn't always make it right. In the image, one sees it as a circle, the other sees it as a rectangle, and since neither are seeing the bigger picture, they mess that it is a cylinder. So many will take away the message that both are correct from their view. But both aren't correct -- both are incomplete and wrong -- the truth is bigger than either of their views. Often there needs to be room for more than one perspective, but ultimately, on many issues there's also a right and wrong.

I got into a big argument with a guy, let's call him Sal (short for Stubborn Arrogant Lout). Anyways, Sal felt that we didn't know if something was constitutional until the Supreme Court ruled on it. I explained that's false, and went around in circles on it -- he was not a little wrong, but a lot wrong. It is true we might know how the law will rule on it, so from a legal perspective, it might slightly be in limbo (though prosecutors and people will make assumptions). But the law does not always align with reality.

I offered the example of if you see someone raping or murdering someone, it doesn't matter if the law has ruled them a rapist or murderer because you know and can see that they are one. Even if he gets off on a technicality, it doesn't change that he's a rapist or murderer, it just means that Sal is a herd following sheep by preferring judicial delusion to reality. The same with the Supreme Court ruling that blacks are 3/5ths of a human being -- it doesn't make them that, it just means that's how the law chooses to see things. This isn't saying you should take justice in your own hands, or ignore the law without consequences -- it means that rational people understand that there are legal and broader ways of viewing the world. And the "legal is the only view that matters" folks, are self deluded and missing that the truth is bigger than their myopia.

A friend shot these two photos using time-lapse on his camera. He was showing off the photos (both of which are nice). But the zoomed in one, looked like a pretty nature scene (with a tiny splotch of graffitti), the zoomed out one, showed it was under a bridge in Colorado that was vandalized and graffiti'd and far less pristine. You can view it either way -- but the broader view, is generally needed context to get the whole message. I captured both of them for writing about, because the dichotomy of perspective fit my agenda, instead of his, of showing off his work. None of them is wrong.

Now that whole message can vary a bit, by individual. It might be that in the middle of urban squalor is a thing of beauty, or it might be that things of beauty like a waterfall are destroyed by humans and the pollution and corruption they bring. Or it might even be a positive message about how there's good and bad in the world, and we need to clean up our messes. People are free to have different messages and learn different things. But there are still truths and lies. I leave plenty of room to have opposing views -- as long as those people leave room for different interpretations themselves. But like the famous quote says, "you have to be open minded, but not to the point where your brains fall out".

The bigger and broader view is usually more right -- and the narrower ones or more wrong.

A variant of this was a friend and I got into a bit of a fight over Thinks or Feels and Brett Kavanaugh. She felt that Kavanaugh was guilty, because of experiences in her life -- she just felt it, wouldn't consider facts that disagreed with her perspective, and was regurgitating every liberal talking point on the issue, and was mad that I proclaimed that she was biased by her own desires and thus cherry picking based on confirmation bias (listening to only that which supported her view). She went back to argue something she's argued (and been wrong on) since she was a teen: that feelings are as important as thinking, and thus they should be weighted equally. Since we'll never know for 100% sure, then her feelings are as right as mine, even if mine has a ton of evidence against it (is based on thinking, with less biases).

Look, we all have a gut (feelings). But I explained it's OK to feel something -- but if you deny the facts that you don't like, then things aren't all 50/50. We had a ton of evidence against OJ Simpson -- so while I wasn't there, and we can't know for 100%, we can know beyond a reasonable doubt what happened. It's not 50/50 that he did it -- it's 99/1 -- despite the feelings of many people that wanted to believe he was innocent. Kavanaugh is the opposite -- we have no evidence he did it, a ton that Ford got wrong and has no one that can confirm her story and many that contradict it, and so on. It's not 50/50, it's 5/95 on likely guilt/innocence. You can still hold the position that you're in the 5%, but if you deny that the odds are against your side, or refuse to accept the evidence, then you're wrong in the micro, even if you're right in the Macro (and it turns out he did do it). The lack of evidence and those contradicting her story, meant it was against him having done it. 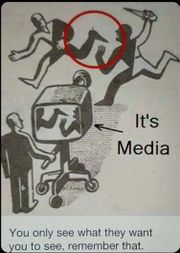 There's this famous cartoon where up close, it looks like one guy is stabbing someone, and from far away you see it is the other. The point of the cartoon is that the media manipulates the narrative. That's completely true. Everyone has an agenda, and can tell things from their side. Heck, a ton of this site is intending to do that -- to show the parts that the media, left, or myopic/lazy thinkers haven't thought of. The "too narrow" of perspectives, that let us miss the rest of the context.

The point isn't that I think everyone is stupid -- though I kind of do believe that in that everyone (self included) can get intellectually lazy and jump to conclusions and take the easy way out (in thinking). But my life is about being a generalist -- thinking about many fragments of stories from the 3 blind men, and how to put all those broad stories together, to see the bigger truth: the whole elephant. We're not all wrong, all of the time, and there's room for interpretations within our partial truths. But people that are denying greater truths are likely wrong in their perspective. And there are many things where there is a right or wrong, and someone saying, "meh, just different perspectives", or "we'll never know" (while they are doing mental gymnastics to not consider the other sides points) is just the intellectual cowards way out of not wanting to consider that they might be wrong on this one.