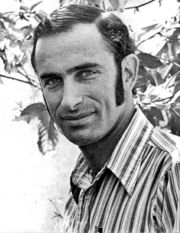 When the 1960’s happened the hippie collectivist environmentalists started their watermelon movement (green on the outside, red on the inside). They had nothing logical to support their fear mongering, so they just went with the long disproven falsehood of Tragedy of the commons, again. First Garrett Hardin regurgitated the Tragedy of the commons, despite the fact that it was disproven 160 years before he wrote it. Then Ehrlich did a shallow, plagiaristic, pessimistic derivative of Hardin and Malthus, entitled "The Population Bomb", basically saying that if you didn’t give government all your money and rights, so they could enact compulsory population control, then there would be mass starvations and war in the 1970s and 1980s that would destroy civilization. Of course it didn't happen, but many on the left seems it will, soon, and believe in over-population is a problem. As far as we know the carrying capacity of the earth far expands with technology and exceeds population growth (so is infinite) -- and current projections are that we'll peak in population in a couple more generations (well below any imaginary ceiling), as currently the worlds population could fit in Texas. Only science deniers think overpopulation is a serious capacity problem.

Despite the opposite of all his predictions coming true, he claims to this day that his book was, "way too optimistic”. Showing this old dog can’t learn from his mistakes. And because his ideas were so wrong, and derivative, he’s won every award the left can throw at him: Sierra Club, World Wildlife Fund, MacArthur Prize, UN, American Institute of Biological Sciences — it’s like the whose who of those that don’t know what’s what.

The left/media/polemics of today will pretend this didn't exist, or it was just a few outlets that were claiming it, and there was no science or momentum behind it. That's a lie. Paul R. Ehrlich, Watermelon environmentalist of the 1960's, not only wrote the discredited The Population Bomb, but he also started another Tragedy of the commons based chicken little disaster: the Global Cooling Scare. In 1968 he claimed fossil fuels had raised CO2 levels 15% which was causing clouds to block out the sun and causing the global cooling they had been observing (a minute fraction of a degree). He was wrong, warming had caused CO2 to go up (not fossil fuels), and it wasn't causing the cooling. But all the watermelon sources bought in: NCAR, CRU, NAS, NASA, NYT, Science, CIA, and so on. We needed big government authoritarianism to fix it, or we we're doomed. This was all the rage until something bad happened... and they realized that despite the 40 year drop in temperatures (due to mans minuscule contribution to CO2), that we were actually warming again. Reverse engines, nothing to see here. Time for the next theory/excuse why we needed centralized Marxism to cure what ails us: this time it was Global Warming. (And when that paused, they changed the term to Climate Change: so that they could use up or down trends as an excuse to prove themselves right).

Thus Ehrlich and others started preaching their next Tragedy of the commons problem: global WARMING. Of course they didn’t gain momentum so quickly after their last fiasco, and it took until the late 80’s until this next excuse for Marxism started taking hold, and they learned how to obfuscate the numbers much much better than before.

Man puts out 14 gigatons of the 22,056,773 gigatons of greenhouse solids/liquids/gasses in our ecosystem (773/year is cycled yearly), and CO2 increases as temperature increases — so let’s blame man for all the observed warning that started 150 years before we put out a single gigaton, and make dozens of exaggerated claims about why we need Government to protect us from TOC. The 1990 IPCC model said we'd warm about 1 full degree C between then and today, it’s gone up .1 degree C (and only that much because they were caught exaggerated the temperature measurements), in fact, we’ve fallen well off the bottom of all their models. We didn’t have the loss of arctic ice cap in 2010 or ocean rise as predicted, antarctic sea ice is bigger than ever, we have more polar bears than at any time in the last 75 years, hurricane strikes (severity and frequency) are at our lowest in 150 years. The fact that every prediction they ever made is wrong, is not enough to deter the true believers in big government, if you give them the cover of “science”. Then they claim science is “consensus”, when the history of science is the individual disproving the consensus.

He is credited with being one of the founders or at least inspirations behind Earth Day/Week:

And there’s lots of other theories all based on the need for government to save us from ourselves (TOC): from prohibition of alcohol, to the drug war, to the FDA’s failed claims on saturated fats, unsaturated fats, ALAR, alcohol is bad for you, salt, that stomach ulcers are caused by stress, and so on, and so on. The people that ignored the chicken little’s dire TOC predictions have much healthier and happier lives by ignoring them than were ever saved by listening to them. It is how George Burns lived to be 100, fuck off whiney douchebags.

You can read more of the story in context at: