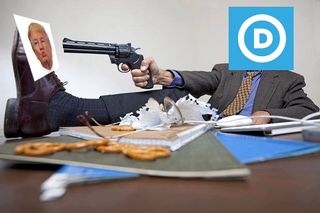 The "Nuclear Option" (aka the Filibuster Rules) isn't really law. Since 1806, the Senate said there was no time limit on debate -- so basically, if a group of Senators was resentful enough over any rule or appointee, they could get up to the Lectern and speak (debate) until the other side gave up: basically anyone could stand on their principles or duty to prevent bad law from getting enacted by discussing it to death (called the filibuster). This guaranteed that all new laws oppressing the people would have to have super-super majority support, and wasn't so offensive to some that it would gridlock the Senate. The Democrats Nuclear Option, ended that.

There had been some modifications like in 1917 the Progressives amended Rule XXII to allow for ending debate (invoking "cloture") with a two-thirds super-majority. In 1975 Democrats/Progressives reduced in to three-fifths of all senators "duly chosen and sworn". Both had the desired purpose of diluting the rights/protections against oppressing individuals/groups. But still, 41 or more senators could block a bad bill, even if the majority supported it.

The Nuclear Option was the idea of killing the filibuster altogether and saying only a simple majority could ramrod their bad laws though the process, if they had only 51 votes: changing 207 years of precedent. The reason they did this is that Obama and Harry Reid were fiercely unpopular, hyper-partisan and had no ability or inclination to persuade the other side. Nor any interest in fixing bad laws or appointments, or negotiating with the other side. They wanted to put in the most extreme picks for Judges, and laws, that they could possibly get their side to agree on (with a simple majority). So on November 2013, Senate Democrats used the nuclear option to eliminate the 60-vote rule on executive branch nominations and federal judicial appointments.

The Republicans had warned the Democrats many times, they won't like where this goes... and probably much sooner than they think. The political pendulum swings... and it was already swinging back from the Obama/Dems fanaticism. So doing this, would haunt them soon. But for the last couple decades, Democrats can't think past winning the current cause of the day. So they had to have it, no matter the cost.

Then Trump won the Presidency in 2016 (the Republicans had already taken the House and Senate) and the Democrats lost their minds (TDS). The fanatical left (meaning most of the Democrats in Congress/Senate) decided that they were part of the #Resist movement, whose idea was that they would obstruct and try to do everything within their powers to destroy, block and undermine the Administration, no matter how good the idea was, or how much in the nation or public's interests. This included blocking and delaying all Judicial appointments, every law, demanding investigations on silly things like "Russian Collusion", and so on. This was a burn-the-place-down temper-tantrum because they didn't get their way.

Trump got his first Supreme Court nomination, and he picked Neil Gorsuch, an eminently qualified jurist. Thus he should have been unanimously accepted. But the Democrats decided that fuck decency, civility and the guidelines for approval, they were going to block/delay the nomination, because they could.

Again, the Republicans warned the Democrats, if they didn't obey their oaths of office and duties, that the Republicans would extend the Nuclear Option to Supreme Court Nominees. But the Senate Democrats (lead by Chuck Schumer) would rather shoot themselves in the foot (or demand the Republicans do it for them: the feckless cowards wanted suicide by cop), rather than be reasonable. So that's what they got. On April 2017, Senate Republicans used the nuclear option to eliminate the exception for Supreme Court nominees, after the nomination of Neil Gorsuch failed to meet the requirement of 60 votes for ending the debate.

Then Trump got another nomination when Justice Kennedy (who was a bit of switch-hitter on some topic) said he was going to retire. And the left, which had already lost their minds, started caterwauling and sobbing over the end of civil rights in America. OMG, the conservatives might actually appoint another strict constitutionalist (Originalist) on the court, that would do their actual sworn duties of defending the Constitution/Law as written, instead of progressives who would re-imagine it and put their political agendas above their legal/ethical duties (like the liberal side of the court often did). Oh the humanity.

I do not like the Nuclear Option. I far preferred the filibuster rules that required more consensus. Yes, it bogged down government, but usually on things that were oppressive to some group or another. It was a rule that basically demanded that legislators, "tread lightly" on how aggressive/fast/far they moved on new legislation (or picked more moderate or at least palatable appointees). Which worked for 207 years.

But Democrats/Progressives don't care about the consequences to the country, their children, or the ramifications as much as they care about getting their way, on everything. (If they did care about the future as much as the present, they would behave far differently). So the elimination of the filibuster was demanded and mostly done by the left (as with most bad ideas). Thus, I take great glee out of at least rubbing their noses in the consequences of their actions. It's delicious comeuppance for the party of hate and divisiveness. Sometimes actions have consequences -- and if they don't suffer a little for their bad choices, then how can we expect they'll learn. Of course Democrats proved they're highly reluctant to growth, or Andrew Jackson (Trail of Tears) wouldn't have been just the first Democrat, he also would have been the last one.

Ben Shapiro (Harvard Lawyer and political commentator) did a brilliant podcast that summed up everything that happened (recently). You should really listen to it, if you have the time.