I sometimes call myself a radical centrist. It's not because I like playing devil's advocate for the sake of being argumentative, it's that many people see the world in extremes: their way or the wrong way. Thus when people are arguing a cartoon version of the world (the U.S. or a President is always wrong/right), I just want to point out that it's a lot more nuanced than that -- and usually they respond with a reductio ad absurdum response, "if you're not completely against X, then I must be for it" (or vise versa). I wish the world that was that simple, but it isn't. North Korea is the perfect example of that.

Trump inherited a cluster fuck, from Obama, and Obama from Bush, and Bush from Bill Clinton. While Bill inherited the mess from Bush, Reagan, Carter, all the way back to Eisenhower and the failure of the Korean war to settle anything -- Bill had a habit of parlaying a disaster into a catastrophe. Thus like turning an opportunity to get laid with an intern into impeachment, he missed an opportunity at settling/changing the Korean War and negotiating a peace, and he instead turned it into 25 more years of Nuclear terrorism.

So Clinton, like Chamberlain, metaphorically said Hitler was quite reasonable and would never use the Military he was creating to attack his neighbors. It was perfectly reasonable for him to want to be able to defend himself against the outsized powers around him. And Hitler was very reasoned.... right up until he wasn't. And by the time he wasn't, it was too late. Just like Castro, Pol Pot, Stalin, Mao, Tojo, Idi Amin, Ho Chi Minh, Mugabe, and so on. But this time, it would be different. So why not let North Korea have thermonuclear weapons, and just kick the can down the road for our kids, like the Democrats/media have been championing? Well, we got to suffer under the consequences of Clinton's naiveté and foreign policy disaster for 20+ years. 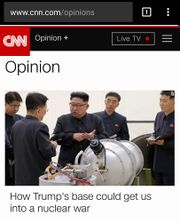 So Trump inherited Sophies choice -- do you play chicken with a megalomaniac, or continue to let the world be bullied and a terrorist to continue to build up his arsenal?

The same people that have been screaming that Donald Trump would turn us into a fascist State from the day he took office (round up all illegals, and start a war), and that think Russia hacked the election, are telling us that we must accept a world where Kim Jong Un has thermonuclear weapons to extort the world, and that the best way to work with global blackmailers and despots is to ignore them and give them whatever they want: e.g. if you do anything but reward him for his bad behavior (thrown money and food over the wall), then he might use them, so the best thing to do is play the victim.

I'm not one for binary thinking, but for thought experiments they help. One of two realities is true, either weakness is provocative, or strength is provocative. So let's see which model works best with Kim and most despots.

I don't know if Kim is crazy, or just manipulative -- I assume the latter. But I don't know if it should matter. The only thing we know for sure, is that what we were trying wasn't working, refresher:

So what did we learn?

All the genuflecting and cow-towing and rewarding bad behavior had gotten more of it. Standing up to a bully forced the bully to decide how far he wanted to go, to try to push around a much bigger and more capable foe, who had enough. Did Kim want to take his one shot, on OUR terms (not his), knowing it would lead to self-annihaltion, stall, or capitulate?

To be fair, the Obama administration came in and made things much worse: 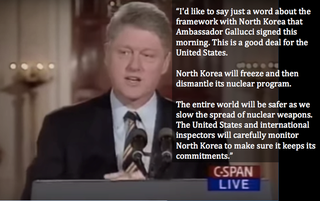 So I don't know the right answer... but History sure hints and the wrong ones. Doing nothing hasn't played well through history (it just let the opponent pick the timing to their advantage). A friend who was a CIA field operative stationed in South Korea (ROK specialist, not DPRK), summed it up pretty well:

So Kim had a choice, continue the blackmail bluff, assuming nothing has changed. Or recognize that China needs the U.S. as an export market, and making them choose between America (their biggest market) or North Korea (their biggest welfare project) might not come out well for Kim. Thus, Kim needed to adapt, and the best way to do that was to at least make motions towards peace, reunification and maybe parlay his North Korean Prison Country into a Communist style sweatshop to earn foreign currency.

Trump had a choice too: continue the appeasement that wasn't working, or threaten the little loudmouth back, remind him of exactly what his position is, and see if you could intimidate him into either shutting up, or coming to the table to see if he could change the terms. I have no idea if this will work or not, but I do know it had better odds of changing things up than perpetuating the status quo.

Now that it seems to be playing out the way Trump predicted, we get to see what Rocketman really wants, and how serious he is about getting it. And while I don't know that outcome, I can firmly speculate that if it hadn't of been for Trump pushing his hand, nothing would have changed for the better.