New Jersey and the Economist 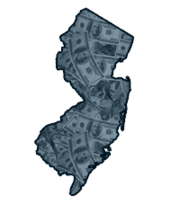 The Economist ran an oft quoted FakeNews story that any first year economics student should call bullshit on. It was that red states get a surplus of tax benefits, because of subsidies by blue states. The truth is that for each $1.00 New Jersey gets back from the fed, they have to give the fed $1.64 in taxes, they have to pay $.18 in compliance costs, and the government borrows about $.81 of that dollar, and sticks New Jersey with the debt obligation. On top of that, federal work-rules and controls means that dollar is actually only about as effective as $.60 would be if it was under local or private hiring practices. Progressives see the $.60 of real value as a net win. Anyone else, can see that you paid about $2.63 to get it. This isn't as dramatic for some red states, but the only states that come out ahead are West Virginia, Mississippi, New Mexico and Puerto Rico (and D.C.). So if any publication repeats the lie of the Red states mooching off the Blue ones, you know they don't have fact checkers, or are just partisan shills.

Progressives think you can make it up in volume: if you just continued to lose $2.00 for each $.60 of value you get out of the system, you'd eventually come out ahead. Non-progressives recognize the seen versus the unseen (The Broken Window Fallacy) and the $2.00 of hurt you did, for each $.60 in help.

I had this discussion the other day with a friend and coworker who repeated many myths in one: (a) Blue States give more than they get (b) Red States get more than they give (c) Red States are subsidized by the Blue States (d) Red States are hypocrites for complaining about government, while getting more than they put in. Only the first one is true, all the others are false. But they read it on a few liberal sources back in 2011 (or a repeat of that fake article), and stupid sticks to the left, while the truth slides off. All they prove is that a lie can travel around the world before the truth can even put its shoes on.

This all started when The Economist did a misleading article. Basically, it claims that some states get more out than they put in (and others put in more than they get out). That's an easily disproven lie. All the other dumb articles I've seen on the topic, either source this article, or use the same flawed math/logic/methodology seen here:

What are the lies?

Ignoring that, there's quite a few logic holes that demonstrate that either the Economist doesn't know economics (something I doubt), or they're flim-flamming and they're playing a front for Labour/Democrat party talking points.

To make matters worse, is this is ALL money that comes back from the fed. But what's the #1 return? Social Security.

So in that program, what you're seeing is people getting their own money back, decades after contributing it (at gunpoint). That's not really a net benefit. That's not stealing money from other states -- it's just showing that the demographics of some red states is older than those of blue states. And it shouldn't be on the balance sheet at all.

But why are red states older than blue states? People can't afford to live in Blue States as much, so they are driven out and forced to move to Red States to retire, which skews the result.

So that's not the Red States benefiting from redistribution from Blue States -- it's that Blue States driving out their seniors like Logan's Run. It's the failed policies of Blue States and the high costs of living, forcing seniors to become more wise as they age about the true costs of Blue State policies. (They don't want to see the tax and spend policies putting them in the poor house, now that they're living on fixed incomes). Thus that's the Red States doing a service for the Blue States, by giving those who got off the treadmill, a place to live. (It also drags down the income averages of Red States -- not because of failure of Red States, but because of their successes at being more cost effective).

Where do the subsidies go

So no matter which state you're in, it's easy to see how the Federal Government, taking your money to buy votes of Democrats (in Blue Cities), is not a win for you, if you're a conservative or libertarian voter. Certainly not if you're a rural voter.

And that's before we apply basic business rules, like "opportunity costs of capital" or other things.

So what happens isn't what articles tell you, that Red States win and Blue States lose. The facts are that all States lose, some just lose more than others. And within the State, the Red Areas and Blue Areas don't win evenly -- the Blue Areas that win far more than the Red areas Which is why Democrats like using government spending to buy votes: their areas see more short term benefits and fewer of the costs. Their people still lose in the big picture -- but their voters are more easily flim-flammed to ignore the costs and see the benefits. Hence why red areas aren't enthused about subsidizing Blue Areas.

There's no magic where you can send a dollar to the fed, have them spend a little, waste a bunch, send a fraction back (with their regulations/rules on how to spend it on top), and the community comes out ahead. Math and economics doesn't work that way. Every dollar comes back smaller than what you sent in. It's not even a zero-sum game, it's a negative-sum game.

In the end the average is that the states lose 35% in a return on investment level. For each dollar they put in, they get $.65 back. Years later, and with all sorts of restrictions on how to spend it. That might make sense to DC bureaucrats (who keep their cut, with vigorish), but makes far less sense for the State, City or Town that pays that much to get that little back.

Republicans by being opposed to more federal government spending are applying common sense, economics and reason. They get it. Democrats claiming they're being hypocritical, only think that because they haven't thought through the issues enough to understand what's really going on.

If the Economist or other so called "economists" that write on this stuff, don't know the points mentioned in this article, then they're incompetent. If they do know it, and omitted it from their articles, then they're polemic frauds.