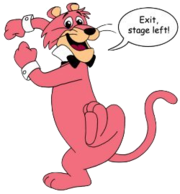 I left when I was 21, and it wasn't on the best of terms. They'd changed my bosses many times during the 3+ years I'd been there, all on a "6 month contract". But they put this person in charge of me who hated me, and everything I represented. Meaning that I was competent, smart, secure, and had some youthful self-righteousness (when I was right). Let's call this person Sharon.

Sharon was "supervising me" and had asked me to look over a few programs (final validation), which I did. I immediately found a glaring error, and brought it to her attention. I thought I was doing my job. I asked her why something was done a certain way because these items that weren't dependent on each other were tied together in a way that made them look interdependent. If there was some dependency that I didn't know of, then I didn't want to "fix it"; but if there wasn't, then it was way more complex than it needed to be.

Turns out that Sharon had written the piece of code with the error, and it was wrong; roughly 16 times more complex than it needed to be. She had given it to me, not to actually do my job (and validate it), but to just rush it through. She didn't want to be called on a mistake; but if I'd been told to just sign off on it, I probably would have. I wasn't obnoxious, but some people have fragile egos. She was livid, because I'd caught something in auditing that was going to make her look bad; so she started snapping at me to just fix it and get out of her face. But I didn't quite get why at the time. (Only later, I found out it was her code). All I knew was that she was not a pleasant person.

So I go and sit down, and start fixing it. I wasn't attacking her, and she was getting very worked up over nothing, in my book - I had better things to do than deal with temperamental humans; like improve code.

Sharon was fuming, and decided not to let it go. She turns to the girl behind her (who sat next to me), and says in a loud voice, "Don't you hate know-it-all young-little-shits, that don't even have college degrees, telling you how to code". She resented all consultants (as they out earned her); but me more than most, since I was much younger than her, made more than her, and "didn't even have a degree". Geeze, there's no pleasing some people.

The girl looks to me, since that was obviously directed at me. I heard my mouth saying this, before the censor had time to kick in, "Hey, that's better than having to work for a clueless arrogant bitch that couldn't code her way out of a for-next loop". It got amazingly quiet in the bay as everyone stopped what they were doing because I'd just publicly treated Sharon the exact same way she treated everyone else. She was livid before, but there aren't words to describe the new state of being for Sharon. She stormed off.

My boss (her boss) calls me into his office the next day; and I suspected it wasn't good. I just said, "did you get me two weeks [notice]". He said, "Yup". They weren't walking me out the door, so I had allies. He asked me what happened, and I explained; and he laughed. He knew I was right, and he didn't like her much - but she was in tight with the head of the entire division. There was an implication there that it might have gone far beyond just friendship; but it didn't matter, in a battle between consultant and employee the consultant will always lose. I knew that, and didn't mind. I'd put in my 3 years, and was ready to move on.

Later, I realized that I could have handled things better; but I'm not really broken up over it. I wasn't looking to work there forever. The truth behind the ordeal was that she had been mad because I was more capable than her, and had resented me for a long time; and as soon as she got a little power, she abused it. Some people are like that.

Amusingly, a couple years after I left, my roommate was dating a girl that worked at Rockwell NAAO, as a tech writer, on that same team. It seems after I left, they had hired two tech-writers.

One day, she and I were talking, and I casually mentioned something about "that incompetent backstabbing witch, Sharon". It wasn't like I was bitter at the injustice or anything. She laughed, knowing exactly who I meant and replied, "I thought she was incompetent, until I read some of her documents; she's pretty good".

I was suspicious because Sharon wasn't good. I said, "Oh, did the documents look like this" - and I pulled them up on my Mac. (They were not secure documents, so I'd kept copies of what I'd written). She laughed and said, "Exactly the same, except the name on the bottom". She was flabbergasted, I wasn't; that's what I thought.

Later, during a meeting, she was getting attacked by Sharon, so asked Sharon publicly if she could have copies of the originals of some of those documents because she wanted to work on them; but Sharon couldn't produce them because they were written on a Mac. Sharon hemmed and hawed, but my friend said, "Oh, it's OK, I have a copy of them right here", and produced an original floppy which she'd gotten from me. Sharon turned pale, and left her alone after that; being that she could have been fired or embarrassed by that whole ordeal. Live by the sword, and die by the sword, I always say.

As it was, Sharon left a while later; some scandal I heard. I'm not mad or bitter at Sharon; either her world view has matured, or she's probably lived a difficult life, with "the whole world being out to get her", because she doesn't realize how the world often just reflects who and what we are. You've got to learn to forgive and move on; though while I can forgive, the Italian in me makes it very hard to forget. I only write it down, to let others learn from my experience whatever they choose to.

Rockwell did call me back a few times for various follow on contracts, or for another Contract working on the AC-130 Gunship project and sub-sub-sub-contracting to Hughes Aircraft (Huge Air-Crash). I had made many friends and one enemy. That's not a bad score. I kept bumping into some of the people from there over the years. Despite a less than perfect parting, I had fun at the NAAO.