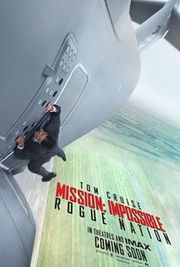 Melissa is the MI:Fan, so we went and caught this.

This was never my favorite franchise: too much over the top action sort of bores me. James Bond before the reboot, Bourne, and the MI's, all were getting to be too much. Watchable, but just too much reliance on unbelievable stunts over storyline. (Along with the hyper complexity of too many interlaced plans). So the Bond reboot was much better than the last few before it. And for the same reasons, while this wasn't a reboot, it was much better than the other MI's for me.

It was much tamer by MI standard. It's still over the top at parts, but not as absurdly so. And it had enough action with car/motorcycle chases to keep you going -- without wearing you down completely.

They gutted the team caper thing, and added a lot more mortality to Ethan. But it's pretty much following Tom Hunt (or Ethan Cruise) on his one man plans (with a few supporting characters). So while they did this in the last film too, and it makes it more like a 008 Film, I never liked the hyper-complex plans with 30 moving parts stuff anyways. So it's more believable, and easier to follow, but if you like the Heist-film format of the old series, you'll probably be disappointed. It has a different tone.

Also Melissa pointed out, that there wasn't that much dialog in the movie. It was pretty tight and utilitarian to the story. A few cute quips. Reasonable dialog. But not fluffy, nobody got laid, and there weren't a lot of cheesy one-liners.

If you really liked the hyper-complex caper-scheme's, this will be a let down. But if you want to watch Tom Cruise as a kind of James Bond clone, it worked well. For me, better than any of the others did. The only thing that didn't work for me was Alex Baldwin. But I've never liked him, and I kept waiting for an in-movie product-placement plug for the Capital One card.

So for me, best in the franchise. But it achieves that by wandering further and further away from what the TV series (and prior movies) were. 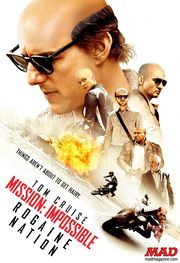