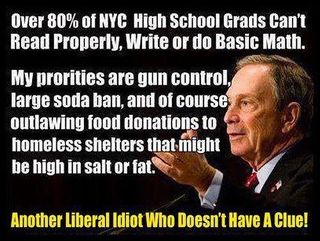 This gun-moron and hypocrite always has 5 armed bodyguards around him. He's always hated guns, and demonstrated basic ignorance about them. In one video he demonstrated he doesn't know the difference between fully and semi-automatic (what defines a real Assault Rifle banned since the 1930's, and the invented term Assault Weapon that he wants to ban, because it has plastic parts that make it looks like an Assault Rifle). He says you pull the trigger once and "pap...pap...pap...pap". Nope, those are illegal. He goes on to show he doesn't know rifles, pistols, or hunting. Hey Mikey, if you don't know what you're talking about, put down the megaphone. I'm sometimes amazed he can operate dining utensils without hurting himself.