There are people who are either too biased (or aren't paying attention) to realize how biased the media is. We're not going to convince each other of anything: me with proof, and them by denying it. So this article isn't for "them". It's just a place for me to collect example's of media bias, for those rational enough to consider them.

There are two groups of journalists, those that admit they are human, flawed and biased, and those that lie about it. To a point, all outlets will pretend they are above bias/agendas -- but actions speak louder than words. And the louder they claim they are fair, or scream against the other side for not being as fair as they are, the more we know they are probably not what they claim.

If you have the facts on your side, you can cooly present both sides, and trust your audience. The less facts, the more you resort to Ad Hominem's (attacking the source), or spinning, to distract from the weakness of your position.

There's a famous chart that goes around Facebook, that places where media organizations fit on the left/right spectrum as well as the credibility versus clickbait sensationalism spectrum. 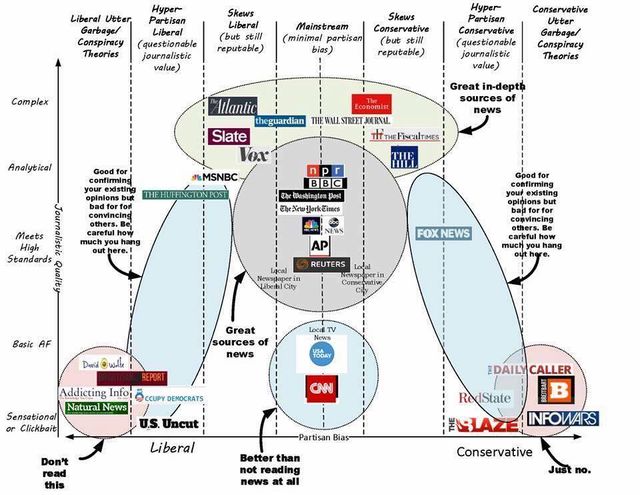 I love it, because it exposes the bias of anyone that reposts it (without mocking the bias of the creators). I mean it was created by a far left website, for the purposes of click-baiting, and maligning the other side. It makes claims that MSNBC isn't hard left, or that CNN and USA Today are completely centrist? That the Economist (with their pro gun-control, anti-fiscal austerity, anti-brexit and anti-Climate skepticism) leans firmly right wing to them? And to them, NYT which openly admits their bias, and WaPo which is even more biased are both centrist to them? Rent a fucking clue, because you don't have one of your own.

I decided to create my own, to show how I thought they were "off" and why. But it needs some explanation. 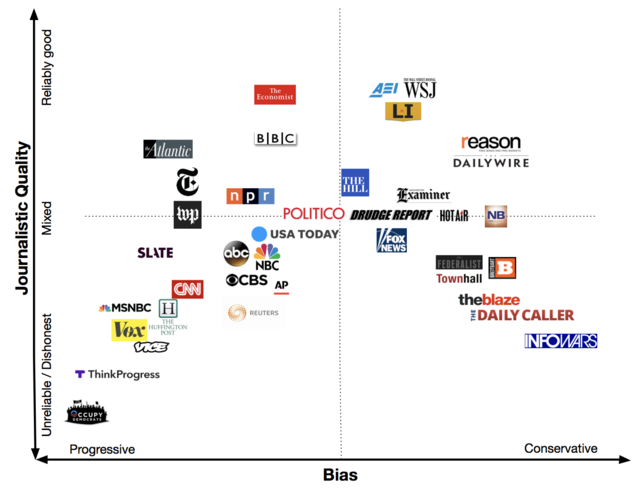 I recommend that everyone try watching both sides on the same topic. CNN rarely offers insights that you can't find on other mainstream (left leaning) outlets -- and many of those later get debunked. So they don't add a lot of value over the things I can listen/read/watch somewhere else. While FoxNews or WSJ often reports things that you're never going to hear on the other channels -- and those things can significantly change the context of what you think is going on.

The same, I suggest reading http://newsbusters.org (conservative) AND https://thinkprogress.org (alt-left) for a week or two, and compare each sides complaints about the other side (in scale and scope). Double-check a few of them for validity. Occasionally, I catch Newsbusters or MRC (their parent organization) committing a lie of omission... and more occasionally I catch ThinkProgress telling the whole truth.

The only way to be informed (judge), is get informed first and try viewing things from both sides. Reading the Times or CNN won't do that. Nor would exclusively watching Sean Hannity. But you can't avoid exposure to the left's news, because it's everywhere. But the left can easily avoid or wave off the rights news: and that makes them more spiteful, ignorant and self-deluded when they do.