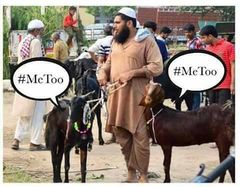 #metoo is the hashtag of sheep, followers, and the antithesis of what we should want from our daughters and sons. Look, I get it. There are people that abuse their positions, and that's wrong. But that's not reason to give up our individuality and reasoning for sake of political correctness. A strong woman comes forward at the time. Weak women wait years or decades and only come out long after they got the job/promotion for their service and when others came out first and the statute of limitations have run out. 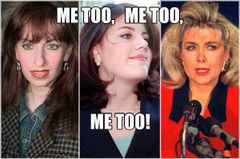 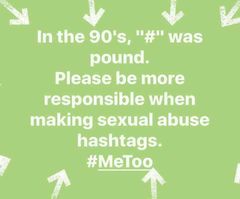 Yes the mating dance is awkward: men have to self humiliate and do the approaching and risk rejection. Women are supposed to reject to see if he'll debase himself through persistent interest, or he was just trolling for an easy bedding. And in that testing game, some overplay their hands -- or some are socially awkward, or just assholes abusing their positions. Few women (or men for that matter) have existed that haven't had the awkward interests of someone that couldn't take a hint, foisted upon them. Or that might have mistook sincere rejection with the game.

(And I realize the game crosses genders, but we're talking generalities for sake of brevity).

Also remember the basics -- that in any population there's a bell curve. In this one it varies from the highly justified, to the highly exaggerated or invented. (With most somewhere in between). So "no", as Duke Rape Case proved, believing all victims (or the media) is not a sign of compassion, it's a sign of gullibility.

The purpose of the political in getting good people to say "#metoo". It is to prey on their good intentions, of saying "I stand with the bullied, abused, or just downright made uncomfortable" (as we all should).... that way, it looks like everyone is the victim of a patriarchy (ignore the bell curve, the demons are everywhere). It's the next stage of the faux campus rape culture, or more faux cops shooting blacks for sport. Stop thinking, just follow the victims of the hour. Feel, don't think!

Why? Because that exaggeration of the problem, gives the SJW's a new tool of scorn.

Once we see the pandemic problem of fictious patriarchy run rampant, it not only excuses and dilutes the abuses of Hollywood and Democrats like Bill Clinton, the entire Kennedy clan, and so on (they're just victims of their own urges, like everyone else), but it demands the need of what? The heroes: the Social Justice Warriors to bully in the name of stopping bullying.

The power to point at anyone they don't like, and put them in the metaphorical stocks and paint a scarlet V on their heads for the mob to lob tomatoes at. Public humiliation, or even firing at will. Bring the Salem witch trials into the modern social media era: that's what caring about your fellow man (or woman) looks like to them.

In other words, the goal is to lose all perspective -- and give a nearly unlimited power of the mob, to the few in the media or celebrities, to draw attention to injustices (imaged or real). What a great society that is.

So yes. People in a complex society have to deal with unwanted advances. And yes, some of them go well past the slightly awkward to downright abusive of power. That's wrong!But we already have rules/laws/policies against that -- and we should enforce them whole heartedly.

There's no courage in a bunch of sheep, coming out when it's popular and safety in the mob, and either piling on the finger pointing at one person -- or trying to dilute the message by saying, "It happened to me too, by someone else, in totally different situation, 20 years ago, with no one who can confirm or contest it". That's not heroism -- it's me-tooism.

You want heroism, it's the woman that risks her job calling out a problem abuser when the rest of the flock isn't bleating. It's the ones who risked their jobs or reputations first. Not the last person to join the crowd with pitchforks and torches.

I want my daughters and sons to come out when no one else is. And to flip the bird at the flock all fighting over who is the biggest victim, or who is the biggest sympathizer, stampeding towards the latest trend. To not fall prey to political hashtags of me-tooism. To silently do the right thing when nobody is watching, instead of trying to be part of the the Human Microphone, and joining the latest fad-hate-mob is gathering rocks for the public stoning.

So while I have complete sympathy for the victims, and contempt for the abusers, you won't get a me-too outta me.

Elizabeth Warren has a bit of an exaggeration problem, as exemplified by her MeToo story:

So which is it? Was she lying before by choosing to show up to his memorial and tell light hearted story about the guy, or was she lying by telling the harrowing tale of how she was traumatized into silence by a superior (and yet there was no consequences)? They seem pretty mutually exclusive to me.

Tara Reade - The FakeNews media has been actively suppressing information about Joe Biden's accuser, while the people screaming about Kavanaugh or Trump, are defending Biden despite a more serious allegation with far more evidence of wrongdoing. If Democrats didn't have double standard, they wouldn't have standards at all. Richard Stallman - On 2019.09.17 Stallman (a known bigmouth) made the high crime of saying that the most likely scenario that hurt his friend (Marvin Minsky) was that Minsky thought he was having consensual sex with a 17 year old, in a country where that was legal. (And that the age of consent varies by culture/region, and if she consented, it wasn't rape/assault). For that he was fired (forced to resign from MIT and FSF). Cancel-Culture going way overboard, again. Kevin Spacey - I'm not a fan, or hater of Kevin Spacey. But I am an opponent of hypocrisy and double-standards. Kevin appears to have done the right thing of apologizing to his victims, after doing the wrong thing by trying to inebriate and exploit them. And GLADD did the exact right thing by not making excuses for the bad behavior, so I give them complete credit for having objective standards (and living up to them), even if it means sacrificing one of their constituents. If only the Trump haters were as fair and balanced.... Hillary Clinton: Bimbo squad -

Hillary is a hero to Women's liberation, unless you were one of her Husbands rape or assault victims... like: Juanita Broaddrick, Dolly Kyle Browning, Gennifer Flowers, Kathleen Willey, Paula Jones, Monica Lewisnski. Connie Hamz , Bobbie Ann Williams, Sally Perdue, Eileen Wellstone, Sandra Allen James, Christy Zercher, University of Arkansas Student, 22 Year old Yale Student, Lencola Sullivan, Elizabeth Ward-Gracen, Becky Brown, Helen Dowdy, Kathy Ferguson, Susie Whitacre, just to name a few that came forward and complained. And as we know with predators, there's like a lot more that have not, or were bullied by Hillary into silence. E. Jean Carroll Rape - An Elle advice columnist (E. Jean Carroll) wrote a book, and decided to include tales of how in the mid 90's, President Trump raped her in a high end department store (Bergdorf Goodman) lingerie dressing room. However: (a) she's a non-credible witness (b) she claims he didn't rape her (c) she's got an absurd story full of incongruities (d) she'd fantasized about the same thing, in the same place, in print, a few years before the incident (e) suspicious timing and ulterior motives (f) she claims to have evidence (a soiled dress) but doesn't want an investigation or to press charges (g) Bergdorf Goodman claims they have no video evidence supporting her claims. This whole things smells funkier than the summer dumpster behind the fish market. Chris Matthews - Chris Matthews, he's ignorant, dishonest, and holds 34 honorary degrees, and one real one (liberal arts). A female assistant producer on his CNBC show (circa 1999) accused him of sexual harassment, and Matthews was reprimanded and she was awarded a $40,000 settlement. Since few have been as partisan, made as many mistakes or gaffs, and he was a sexual harasser, he's of course been the recipient of many leftist accolades in journalism. Brock Turner - Brock was involved in a drunken encounter with a co-ed and caused and outrage among the snowflakes that his life was MORE ruined. Asia Argento -

Asia Argento demonstrates everything that's wrong with Hollywood (and the larger SJW Entertainment industry), with her sanctimonious hypocritical speech. She calls out Harvey for "rape" on something she willfully participated in and blames everyone else for allowing it to happen after she didn't lift a finger to report or stop it, and the truly clueless will call her brave for coming forward (after everyone else gave her cover), and for being a Woman's advocate after sucking dick in exchange for career advancement -- and only coming forward after she allowed the abuse to continue for 25 years. There's a word for what she is, and it isn't "hero". Aaron Persky - Aaron was a victim of mob rule Lynch mob in California.

2019.02.19 Sailor Kissing statue vandalized - One of the most famous photos of WWII is of sailor (Glenn Edward McDuffie) kissing a nurse in Time Square on VJ Day (the end of WWII). Glenn died, so the next day some snowflake tagged a stature memorializing the event with #metoo. 2018.05.22 Paige Patterson - The left (and WaPo) hate Conservative Christians, especially their leaders. And they love flocking to a good lynching: so they did a #metoo hit-piece on Paige Patterson (head of the Southern Baptist Convention) claiming he slut-shamed/blamed and urged a former seminary student (Megan Lively) not to report a rape. But the facts hint strongly at a different story, and it was a journalists responsibility to report all the facts. 2018.04.26 MeToo - Brokaw denies the accusations by 3 women of unwanted sexual advances (one in 1968, two in the 1990s). Former colleagues Rachel Maddow, Andrea Mitchell, Maria Shriver, among the 64 Women that signed a letter saying Brokaw is "a man of tremendous decency and integrity", under the theory if he didn't harass them, then he didn't harass anyone else. Megyn Kelly (acting like a journalism) pointed out the tautology, "you don't know what you don't know".