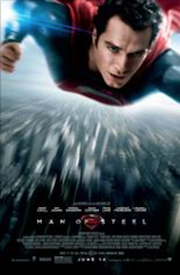 You can't trust Reviewers. They gave this a 56%, and gave Star Trek an 87%? (82/92 by viewers). Star Trek: into Darkness (e.g. Wrath of Kahn) was derivative and it didn't have to be. While this threw in a lot of original twists and new ways to tell the story, which was harder to do. So I give Man of Steel writers a LOT more credit for story than the latest Star Trek Movie.

But I'd put this at least equally entertaining with Star Trek. Though I preferred the Dark Knight reboot over this one, and I hoped for a little more. Still, I liked this better than Ironman, or many of the other Superhero genre released lately (and I didn't mind those). Which is saying a lot, since Superman is inherently boring.

Some other friends DESPISED ithis with a hot steaming passion for not being true enough to original comics/series. (Way too "out there" for them). So it's NOT for purists, and those who expect it to stay true to the comics -- this is more, "Alternate Universe Superman". And for them, it came across as a preachy lecture: "America is looking for a symbol of hope. And along comes a handsome representation of change and some heavy Christlike imagery. Instead, you get a someone that goes around destroying everything on the planet at great expense to the taxpayer. Eavesdrops on the conversations of others, invades their privacy and....so on."

But for me, this brought the story to a new generation, with much better effects, quite a bit of backstory, and it flowed well without being overly campy (at least within the framework of the franchise). So if you're looking for a Super Hero movie, this is probably the best released this month.