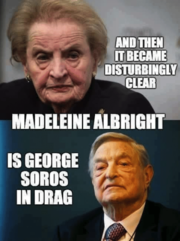 I must say, after seeing her speak and reading multiple things by her (books, articles, etc), Madeleine Albright (Marie Jana Korbelová) is a vicious, small minded and fundamentally dishonest person. IMHO, of course. She served under Bill Clinton as the Secretary of State (1997-2001), and is one of the few that served under him, without that literally being true. I can't say I blame him, dishonest people are a turn-off. This goes into a few things about her.

Her political career started serving for Ed Muskie, and Jimmy Carter. In other words, she started out learning her tradecraft from two of the biggest fucking disasters in foreign policy we've ever had. The Oil Crisis, Malaise, Killer Swamp Rabbits, getting the Shah to give up his seat and causing the Iranian Revolution, failing to rescue the hostages in over a year: incompetence doesn't begin to describe it.

Then her Résumé goes to being the Democratic Party foreign policy advisor for Vice-Presidential candidate Geraldine Ferraro in 1984 and Presidential candidate Michael Dukakis in 1988 -- two of the worst political defeats in our nations History. So with a Résumé like that, Clinton made her Ambassador to the United Nations in 1993. Where she oversaw the genocide in Rwanda -- while she had harsh words for others involved at the time (and blocked Boutros Boutros-Ghali from second term as U.N. Secretary: one good thing), history shows she was for reducing forces trying to stop the gennoacide and was all for non-involvement at the time. Her typical revisionism usually has her inferring that she was a champion of the cause and only regrets not doing more (instead of an incompetent facilitator that prevented more from being done).

Being able to misremember history like that, meant Clinton HAD to make her Secretary of State. Which she played as breaking some glass ceiling, and thus is loved by feminists who want to ignore more substantial conservatives who had already cleared the ceiling for her. The first rule of modern feminism is put party before gender. 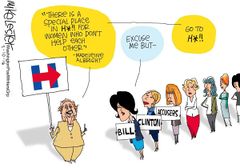 Some prominent Republican appointments include:

So having been mentored by Ed Muskie and Jimmy Carter, she wanted to leave her mark as Secretary of State and gave us:

"Iraq is a long way from USA but, what happens there matters a great deal here. For the risks that the leaders of a rogue state will use nuclear, chemical or biological weapons against us or our allies is the greatest security threat we face.” 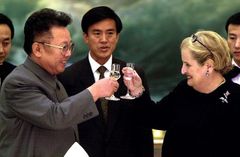 After she left public office, she remained a loyal ally of the Clinton and Obama administrations, no matter what corruption or illegal activity they have done, and has never said a nice thing about the opposition party candidate or achievement. To give you an idea of her objectivity and putting the interests of the nation above politics:

She wrote the book on Fascism

If there's one thing Albright should know a lot about, it's Fascism. She came over as a refugee from fascism, and supported the most fascist administrations in my lifetime (Obama). And she wrote a book on fascism -- taking cheap shots at the Trump Administration. So of course the NYT loved the book (and forgot to mention their historical support of Hitler and other fascists)[3]

Having read a dozen books (and hundreds of articles) on the rise and fall of National Socialism, her basic tenet that the left and right were fighting in the streets of Germany or Italy is either pure ignorance, or pure lies.

If you ask, "What is fascism?" the answer is not anything like Trumpism. It looks a lot more like Obamanomics. Fascism is National SOCIALISM, and was about government controlling private business through taxes, laws and regulations, and authoritarian executive orders. All things Obama (and Clinton) were happy to do. While Trump has done little but rollback some of that executive overreach, and push congress to do their job (anti-fascism). Fascists came from and always will be a left wing movement. There was no conservative movement trying to push back to the way things were and moderate the changes that their progressives were demanding, there was no effort to fight for individualism or against big government solutions — there was just 3 flavors of lefties: communists, socialists and fascists, all fighting over which faction of far left ideology would win over an authoritarian left wing government that would put the collective above the individuals.

They were all pro-centralized government, pro-gun-control, pro-eugenics (abortions), anti-business (government controlling the businesses through regulations and laws), they all believed the rights of the many should outweigh the rights of the individual, they all believed in massive federal public education (indoctrination), and a two tier system where the party elites would be one class and the rest were all an inferior class. And they mocked the more individualist governments as inferior (like the UK). Frankly, they sound like Bernie Sanders or Elizabeth Warren, with a little more racism and militarism.

Either Albright is completely ignorant of all that history, as is every fact checker she and the NYT has on staff, or she’s doctoring truth because she knows her base won’t call her on it. Either reflects on what a dishonest or incompetent piece of trash she is.

She came to my work (Adobe) in 2016 and spoke. I left thinking quick wit, somewhat charming/humorous (over-rehursed) anecdotes, and never missed an opportunity to barb the other side or misrepresent a story in her favor. That, and of course they've never invited a conservative to speak at my office.

I would have like to have seen some deeper questions asked, or challenge anything she lied about (spun). Questions like:

Basically, where does the head diplomat draw the line? But this wasn't that kind of event. It was meant as an opiate for the progressive masses, not anything that would encourage thought. But alas, she doesn't do any hard interviews since the 1990's and 60 minutes got her to admit how cold and dishonest a person she really is.