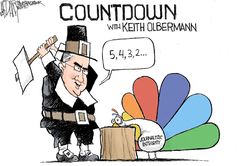 Keith Olbermann, I hesitate to mention his name, because he's a has-been whose star-of-stupid has been burning out, like his sensational rhetorical style.

Olbermann's long history of hyper-partisan distortions, out of context lies of omission, and other frauds, ruin his credibility and those who too freely from him. It's like over-using Sean Hannity or Rush Limbaugh rants on Hillary: they might occasionally have points, but using them as the source can undermine your cause.

For example the very first person Olbermann compares Trump to is Joseph McCarthy, a really bad comparison, if Olbermann knew enough history to know why it was a bad comparison. But dislike Trump or not, he is no McCarthy (he's more a Teddy Roosevelt). But ironically, it's sort of apt in all the wrong ways, as McCarthy was smeared and slimed by the media and more the victim of McCarthyism than any of those on the FBI and State Dept lists that he was forced to read from.

I suspect the reason why Trump is rising in the polls is the media/left/democrats have convinced the public that Trump is the antichrist. Thus if Trump doesn't eat a baby on live TV, then he's exceeded the expectations that the Media/left set for him: he's always over-delivering. While Saint Hillary has the opposite problem. She's been played in the media and by her fans (but I repeat myself) as this professional super-diplomat that's never done anything wrong in her life. And thus, as the public is reminded what a corrupt shrew she's been, that lies about everything (including her health), she can only drop as she falls well below the bar of expectations that the media has set. So the media is dooming itself to failure -- it's how Trump got his popularity in spite of the stupid things he's said in the first place. If you know you can't trust the media (as anyone who's been involved with them or fact checked them should know), then they have the opposite effect than intended.

A popularly stupid rant by Olbermann, after his career was in ashes, and the only place that would publish him was GQ:

To give you context (and quoting liberally from National Review, here's various media outlets: He’s a gaffe machine. He’s an evil racist who wants to return black people to slavery. He’s a brutal sexist who wants to return women to the subservience of the 1950s. He’s a nasty warmonger who doesn’t get the fundamental intricacies of modern foreign policy, with the Manichean worldview to match. He’s an old homophobe with a history of cruelty to workers.

So forgive the informed if they're not as gullible as Democrats to the far left propaganda machine that is our media.

Lie spewing polemics like Keith Olberman don't persuade anyone to do anything but stick a finger in his eye and ignore everything he says, just because 85% of what he says are lies (of omission, commission or exaggeration). But the only thing folks like him or videos like that can do, is polarize the informed against the Democrats.

Olberman does everything he accuses Trump of, in a video where he's excoriating Trump for doing it, then he wonders why those that hate hypocrisy would be MORE likely to vote for Trump after watching it? Or perhaps he doesn't care, because he knows his base will overlook all his frauds and lies, because it's for a good cause.