MSDNC talking head Joy Reid, is a dimwitted partisan polemic, that gets as much wrong as right. But she made a fatal flaw for her culture.... she got caught being a bigot. Well, that's not a problem if you're bigoted against conservatives, libertarians, religious folks, pro-lifers, fiscally responsible people, Jews, taxpayers, asians, or one of the groups that you're allowed to be bigots against. She did that a lot. She got caught being a bigot to one of the minority groups that you're not allowed to be bigoted towards: LGBTQ's. And when caught she claimed she was hacked.

While liberal outlets ignored her delusion that the reason for her anti-Gay rants was because she was "hacked", the conservative outlets didn't. And that was enough to keep the message out there long enough to create pain for the queen of the asshats. 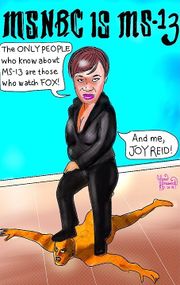 Trump should be arrested because she doesn't like him: https://www.dailywire.com/news/29185/watch-joy-reid-runs-fantasy-segment-trump-being-ryan-saavedra

She was an avid ranter on Russiagate... but it turns out Russian trolls supported her anti-American screeds all the time. They were her biggest fanbase. Something she never addressed while screaming that Trump should condemn both the white supremacists that supported him.

She fat-shamed Rosie O'Donnell, and Rush Limbaugh and Karl Rove :

She made up quotes attributed to NRO's David French: