How did John McCain ever lose in 2008? He's now the most beloved politician since Ronald Reagan. The scam (I see it repeated on CNN, or their newsprint editions: NYT, WaPo, Time Magazine, etc). The left loved smearing McCain during the 2008 election, mentally unfit, temper ridden, wife abuser, and so on. Once he started bashing Trump and obstructing the right, he became sainted again. Unless he was running against a democrat, then he was attacked. You can predict how the Press will treat McCain, depending on whether he is attacking Republicans or not. I have no problem with someone who is morally consistent and goes against party. But I do have a problem for someone that switches side for attention, voters whims, or vindictive reasons -- which sums McCain up in a nutshell.

The left mourns McCain, because his death means a more consistent conservative might be put in his place, not because of any true respect. And their crocodile tears don't impress me because they don't give a shit about him or his views, and never supported him while he was alive (in fact they trashed him), they only do it as a way to dig at Trump.

Trump, for once, is remaining diplomatically silent... even when one of his arch enemies dies. Something he should be celebrated for (instead of his usual logorrhea tweets). But the left hates him, no matter which path he chooses. So instead he's vilified for not crying crocodile tears that we all know the left would also attack him on, "He's not sincere enough in his mourning, and everyone knows this is just an act". 99% of those mad at the President for not saying anything (from the left), would be just as mad (or more so) if he did say anything, because it wouldn't be sincere enough, or would be over the top, etc.

In other words, they're just bitching about Trump, because they want to hate everything he does. Which all reflects more at the Press, than the President.

It's the exact same as when Obama skipped Margaret Thatcher, Antonin Scalia or Nancy Reagan's funeral... was it douchey? Maybe. I certainly think he could have shown more grace, rather than going to SXSW or playing golf. But the left/media was fine with that, or defensive of him not pretending to care... even if he was more crass, for more accomplished/stable people. But the conservatives will never appease the left, because their hate exceeds their reason.

Trump, I expect less of, partly because of who he is, partly because the media doesn't pretend he's the saintly statesman that they pretended Obama was (despite his gaffes). Still, I imagine Trump will at least attend, and not one left leaning outlet will point out that contrast (between him and Obama)... but we'll see. I don't set the bar high for Trump, but they'd already put it on the floor for Obama, so he might trip over it.

Was McCain a racist? I'm not sure. When posting this to facebook friends brought that up -- like his barbs against the Vietnamese as "gooks", or opposing MLK day. (These were meme's the press ran against him as President). But like Trump, when you look into the context, it's more gotcha falsehoods from the left, than real to me.

Yes, McCain used "Gook" in the old way: to refer to the North Vietnamese Communist Vietnamese (not all Vietnamese) as nasty little gooks. When you're tortured for a few years by inhumane little socialists, I give someone more leeway to use slurs. He further defined his statements as "those who tortured me", and not even all North Vietnamese Communists and their sympathizers. Which makes is a personal attack, not against a whole race -- thus not racism. Not only did he clarify, but he apologized to the Vietnamese community at large, and clarified he had no problems with them. That certainly mitigates the charge as well. (Real racists don't apologize). Is that over-parsing? Sure.... but I hate the slop of implying that everything insensitive is racism, it isn't -- it's just asshattery. So calling McCain a crass asshat is fine. Calling him a racist for that, might be going too far.

The same with MLK day, that was nuanced as well. I know a few people that felt combining Lincoln/Washington into one birthday was silly/offensive. And since Lincoln did more for blacks than Martin Luther King did, it was pure identity politics over history. So while I don't know the details of why McCain opposed it, there are some very valid reasons to do so that are not racism. And assuming racism, without being able to prove it or back it up, is as bigots as those being charged. (You shouldn't throw shade on anyone, unless you know. An I haven't seen the shade throwers being able to back it up).

There was also the polarizing story about a bomb that skipped across the deck of an aircraft carrier and multiple men were killed. And there's rumors that his dad (the Admiral) and his connections prevented him from getting in trouble for doing something poorly during the event. But there are conflicting stories, and I can't find what he actually did wrong, other than be at the wrong place at the wrong time.

To show what a petty and bitter little man McCain was, his highly scripted funeral included Meghan McCain, Obama and others, along with his final letter, all knocking Trump. And he explicitly made sure certain people weren't there, just as a final point to remind people he never got over anything or grew past it as a human being. Sad, but honest. It leaves me thinking, "what an asshat". If I wanted to leave the world with one parting message, it wouldn't be jabs over temporary politics, which will be gone and forgotten in a few years anyways, it would be something to remind people of all our mortality and to try to do good things -- like not holding on to grudges, because we all die anyways. 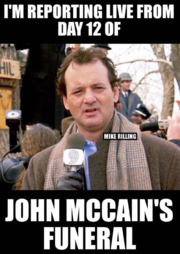 The point is that in the left's eyes, Trump was screwed either way, because nothing he said or did was going to be sincere enough for those that want to be offended. Thus all the complaints and hand waiving about his slights are just evidence of the media/audiences biases more than of Trump's failures. They've spent their credibility on the last 18 months over overblown drama over everything else. Now even if they had a point (they don't), they have no credibility left to make it with.Trump's done things I disagree with. Leaving the flag at half mast for the minimum required, or not having dishonest faux speeches about what a great man he was, is near the bottom of the list of things I care about. But the Press being double-standard pushing hypocrites is near the top.

As for McCain, I half regret my vote for him in 2008. He might have still been the better choice than the great divider (Obama), we will never know. But the more I learned about him since that election, the less I liked. He hurt people for politics and attention, and let himself being the medias spoiler, in trade for face time and votes. He married for wealth, and in at least a few cases, didn't treat his wife very well. And finally, in death, he showed that even his mortality wasn't enough to make him magnanimous or forgiving -- he died trying to gouge the eyes of anyone he felt had wronged him. That doesn't leave him as a hero, but just a bitter, broken and flawed human. 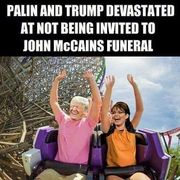