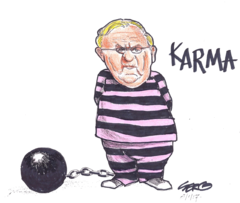 I'm not a Judge Arpaio fan or foe. When it comes to the law, I care about whether this case is just or not.

Some of his implementations, seemed over the top to me. Righteousness can go too far. And being right on one thing, doesn't mean you're not wrong on many others. Did he take it too far, did he get looney on some conspiracy stuff, did he ignore sex crimes like Obama ignored IRS abuses of conservatives? And so on. There's certainly a case to be make that he wasn't Saint Joseph. And I am not a fan because he's a bit too cavalier with civil rights (and a bit too arrogant and blow-hardy). But none of that is relevant at all.

The thing that matters in his Pardon, is none of that baggage that others want to bring to the table, but just whether he was being treated fairly in this case or not. And whether the President was right to pardon him (justice was more served by throwing an octogenarian in prison, or was him losing his job and leaving in disgrace enough?).

Arpaio was Maricopa County Sheriff for 24 years, from 1993 through 2016, and he was called “the toughest sheriff” in the USA. He was an outspoken and polarizing figure (on many topics) that the left hated for all of his positions (good or bad). And he was voted out of office on November 8th, 2016 -- and would have ridden off into the curmudgeons prison in the sky, if not for the revenge of leftist judges, mad that a Sheriff would enforce the laws as he interpreted them (too enthusiastically), instead of just blindly cow-towing to a lower courts questionable rulings.

During his tenure as Sheriff, he was known and loved/hated for the following policies (often around Jail reform or immigration enforcement):

On the other side of the fence he did some more sketchy things:

The biggest thing he was hated for is Immigration law and "racial profiling".

The left hated the idea that Joe might enforce immigration law. While there had been a few failed attacks before, once the Democrats came to power in the Obama Administration, the witch hunt began in earnest. (Joe's outspokenness certainly made himself a target).

The case was assigned to Judge Snow, and there appeared to be no love lost between Arpaio and Snow. Basically, Snow didn't like the idea of a local sheriff enforcing immigration law, and was going to put him in his place. And Arpaio didn't take kindly to a judge interfering with his police work and investigated Snow back for any improprieties (which of course isn't a way to make you a fan of the court).

So the ACLU lawsuit Ortega Melendres, et al. v. Arpaio, et al., that Snow presided overr ruled because the cops had taken calls by people that sounded like they were racially profiling (while complaining about questionable or criminal activity), the Police were guilty by proxy of profiling since they had responded to those calls. Thus the valid arrests made by following up on those questionable calls, were considered "illegally detained Latinos, violating their constitutional rights" since they were first investigated based on racial profiling. Plus in an area that was heavy latino, there was a lot of latino stops (compared to the national average).

So based on that bad civic ruling that had little direct evidence, Judge Snow issued an order mandating necessary changes by Arpaio and his agency to "prevent continued misconduct and safeguard the community from future violations of their constitutional rights". By allowing enough auditing that he could tell if actual abuse was happening in the future.

When Arpaio complied with the minimum (in his eyes), and didn't comply with the minimum in the judges eyes, the Obama administration pounced. They didn't go for civil contempt of court (since this was a civil trial), they politicized it and jumped on a criminal contempt of court by a Clinton Appointee Susan Bolton, who was also on the left side of many other immigration rulings, in what many feel was a politically motivated attack on Arpaio. Basically, the left side felt that by continuing to enforce immigration laws, and not complying with changes in policy demanded by a civil court, he was guilty of a high crime.

Before Sentencing in October (where he could have gotten 6 months in jail), Trump stepped in and gave Arpaio immunity.

Some claim Trump was committing a political act. But they're ignoring that it was multiple political acts that lead to his conviction in the first place, which was the crime of enforcing immigration law.

I thought Dan McLaughlin‏ did a great job of capturing the basics in his twitter storm[1] (which I capture, and reformat and add commentary to, below):

Presidents use the Pardon for political reasons (bad laws or judges getting out of control).

So like it or not, this kind of thing is nothing new, as is actually what the statute is for (so one party doesn't get to railroad their political enemies, indefinitely).

So I have no problem with people that want one standard. If they were screaming from the rooftops about the abuse of pardons by Obama, then I'm certainly fine with their consistent complaints against Trump. But that's not what happened. 99% of the Press that had no problem, or celebrated, Obama's far bigger overreaches, suddenly find this grounds for impeachment and the most horrible thing ever. Why? Because they hate Arpaio, Trump or Immigration law. So hypocrites (and their sheep) should be called what they are.

I don't mind which side of that people come down on. I don't mind if they like/hate Arpaio. I just mind that they get the basics of what this fight was about. This was not Arpaio rounding up all brown-skinned people and kicking them out, or most of the things I hear the media misleading their base on. This was much more focused, and about how much punishment an ex-Sheriff should get because he wasn't as enthusiastically compliant with the Obama administration and their interpretation of immigration policy. The crime he was being punished for was not doing what a Judge told him to, in a highly debatable civil ruling. And since Arpaio was no longer in a position to break or comply with the law, the ruling wouldn't have impacted a single person or had anything to do with civil rights.

One of the major purposes of the pardon was to prevent one administration from punishing their political enemies, without the next one being able to free them. And that's exactly what happened here.