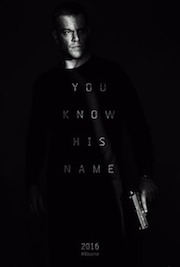 Matt Damon is a flaming douchebag and hypocrite, but is not the worst actor that ever became popular. (His hypocrisy on gun-control and green-preaching while flying around on private jets makes him a smuggle). So I usually wait for his films on Netflix or something where he gets a much smaller dollar return on my viewing. But a friend wanted to see it, and I'm not against bad action films, and I'd seen the others in the series, so we went and saw the 4th episode in the trilogy.

The good news is that I went in with low expectations. Having seen the other Bourne films, the first one wasn't horrible and they'd been on a downward glide-slope since then. It was everything I hated about the mid-80's James Bonds or earlier Mission Impossible's: very thin on plot, what it did have was intellectual weak-sauce, and then too much over-the-top action with shakey cams, implausible physics, invincible characters, interspersed with absurd fight scenes. So 123 minutes of escapism, interspersed with mentally playing MST3000 in your head.

Light spoiler on the backstory (that you wouldn't go into this movie in the series not knowing): Bourne is a super-tool that volunteered to have his memory wiped to become a bigger tool, and now he remember micro-segments of himself in flashbacks, with obligatory regrets and angst for having killed a handful of really bad people. Yet his ethics against killing end as soon as "the good guys" (or real bad guys: the Americans) are trying to bring him in (control an out-of-control murder-machine asset), so he goes through them like a hot knife through butter, with nary a concern for the lives lost and families of Americans ruined. But mass murdering terrorists, he still thinks is wrong to kill in cold blood. But that's because there's a conspiracy that he signed up for (project Treadstone), that he now realizes is wrong, because he's a secret too big to keep from the public -- as the public has no idea that the U.S. has killers in the CIA or military -- especially ones that like jumping through windows. Or something like that.

In this movie that includes Jason Bourne, as pseudonym for his original identity of David Webb, demonstrating that the worst thing to be is the friend (especially of the female persuasion) of a protagonist in an action film: because having your part-time mate, friend or family killed is the fuel that powers to action engine. Typical, boy meets hacktivist, boy loses hacktavists, and then runs around uncovering the truth -- and the only truth is that you just spent $10 on this ($20 if you had a hot-dog).

As for the point of the movie, I think it's to prove to the audience that physics don't apply in this alternate reality. First you're chasing a SWAT van that careens off cars, then it creates the mass and momentum of a freight train and sends cars flying without slowing down, then it stops because it crashed into an awning. Hackers are morons that don't know how to air-gap machines (disconnect them from networks) when decrypting juicy data. All while a CIA millennial chick, with all the seasoned experiences that a 22 year old can muster, is both his ally and antagonist, taking on the entire system because in a few years, she'll be old enough to rent a car. Oh yeah, and something about a tech billionaire and building an ultra-spy network out of Pokemon Go, but now kind of regrets it, or something.

Rotten Tomato critics gave it a 57%, audiences a 66% -- but that site is littered with pot-smoking basement dwellers that enjoy the intellectual depth of Zoolander. Thus, I think they were generous.

It's not the worst movie you'll see this year: unless you care about plot, believability, freshness, or not getting motion sick from action scenes. And if you go in expecting a re-tread of the last 3 Bourne movies, you'll probably come out thinking, "Meh, it wasn't THAT bad".