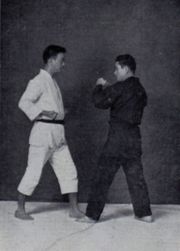 James Mitose was an Japanese American that learned the hard way about our legal system and how the public views Martial Artists. He is well known in some Martial Arts circles, because he brought Kenpo/Kempo over to Hawaii and the mainland from Japan, and is one of the important Masters of the art.

Roughly the story of James Mitose after World War II is as follows.

There's a lot of fuzziness on the confrontation, what happened and whether it was ordered or not. And a lot of this was compounded by cultural misunderstandings, language barriers, and so on. Like during the trial the student was asked about Mitose, and, when replying the student always used the honorary "Master Mitose".

Not understanding Japanese culture or Martial Arts etiquette, and being that this was only a short while after the Manson slayings, the prosecuting lawyer and the jury took this to be an admission of the student that he was controlled by James Mitose (he was "the Master").

When Mitose was asked if he felt responsible for the death, Mitose replied in the affirmative, as it is customary in Japanese culture for the instructor to feel responsible for the students actions. This was interpreted by the jury to be an admission of guilt, and the defense attorney was denied bringing in an expert to testify on oriental culture and what was actually meant.

Mitose was sentenced to life in prison, and later died in Folsom State Prison in California. While the student spent 3 years in prison for actually committing the act.

There is always some doubt as to whether the student was trying to knock some sense into the man, and things got out of hand. Or he intentionally killed him. There's debate on whether when the student left, the man was still alive or not, and what he died of. As well as whether he was ordered by Mitose or not. I don't know. I wasn't part of the jury, and I only read second and third hand accounts, long after the fact -- and they tell pretty different versions of events.

Just because you're a Martial Artist doesn't anoint sainthood, and I know little of Mitose's true character. But the point is neither does most of the Jury when they make the decisions. They go with their gut, what evidence they saw, their biases, what they want to believe, and their bigotries.

The people who knew and believed they understood James Mitose and his philosophies the best, claim that he was a pacifist and believed in the law. Even while he was imprisoned he stated that he understood how the system had made this mistake, and he was not embittered by the error that stole his freedom from him. He proclaimed his innocence until the end, as many imprisoned men do.

In the end, Justice is not only blind.... but it can sometimes be stupid (or unjust). Whether Mitose was complicit or not, this is an example of not understanding another culture, and how politics and current events effect court cases, and how fuzzy our justice system can be. Our courts have the same fallibilities that we as humans have. So while we must respect the courts, and try to obey the laws; we should not confuse justice with the law.