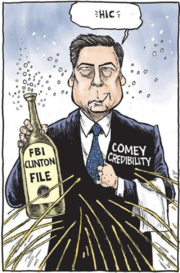 What do we know about James Comey?

So the Democrats can hang their hat on what a great, upstanding, career G-man he was. But his time in the sun is almost over: he will be a failed and fired incompetent and corrupt politico that was working in D.C. and did more to harm the FBI reputation than any other man in history. Except maybe Mueller, and the Democrats that supported them for their political agenda (of undermining the Nation, as long as Trump was in charge). 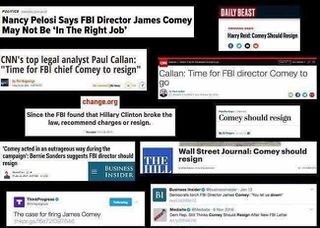 Some of Comey's greatest hits, any one of these should have been a fireable offense:

The FBI has collapsed from respected agency, to comical farce, with a Political actor at the helm. Few can point to something he handled well.

This all ties back to the Russian Collusion Conspiracy Theory. The core reaction is whether you believe in the Trump is a Russian agent/pawn, or you live in the real world. If you believe the former, then what Trump did was obstruct an investigation into something he was criminally culpable of, and disqualifies him from office. If you are in touch with the facts, and realize a couple years in, and the only evidence they have is a paid-for-by-Hillary fake dossier, and some 3rd stringers that might have casually talked to Russia about things that weren't illegal, and Trump's reaction to Comey was completely understandable. There can be no obstruction unless there was a crime of Russian Collusion that Trump was aware of.

So the big outrage is that a President, knowing that there was no crime committed and that he was not the target of a criminal investigation, dared to ask the FBI director to explain that to the public (like he had done for Hillary), but Comey, the unabashed Hillary fan and NeverTrump'er, let the lie (that there were investigations) fester in the public media, and undermined his boss with illegal leaks. After the President asked for loyalty (to the country), and realized he wasn't going to get it, one buffoon fired the other one. If you find a scandal, let me know. All I found was Democrats Obstruct, Resist, Delay strategy buried under a mountain of hypocrisy, followed by failed witch hunts, and moving the goal-post [7]. Anything that will make the President look guilty and help do the Russians bidding of undermining our influence in the world.

Here's the big difference: the CIA lies for a living, the FBI tells the truth for a living. Their word is supposed to be their bond, and unassailable -- and they fire people (like McCabe) for "Lack of Candor"[8]. We know Comey got caught lying more than McCabe did:

After months of histrionics loaded with false narratives Comey takes the stand and crushes the Media/Democrats narratives like: [11]

The core reaction is whether you believe in the Trump is a Russian agent conspiracy, or you live in the real world.

We know from the Comey memo's that he, the FBI and the DOJ fought to prevent being released that Comey was behind many illegal leaks to the Press. Most likely, including the Steele Dossier.

The big outrage is that a President, believing there was no crime committed, and that he was not the target of a criminal investigation (nor was Flynn the target of one), dared to ask the President for the FBI director to explain that to the public, like he had done with Hillary. But he let the lie (that there were investigations) fester in the public media. And the President asked for loyalty (to the country).

If you find a scandal, let me know. All I found was Democrats Obstruct, Resist, Delay strategy buried under a mountain of hypocrisy. Followed by failed witch hunts, and moving the goal post. Anything that will make the President look guilty and help do the Russians bidding of undermining our influence in the world.

They of course moved the goalpost again, now it wasn't about Russia, but it was about obstruction of a non-existent crime. [12]

The absurd media and democrat position

The media and Democrat meme has been that Comey had something on Trump, and firing him will silence him. And this is all about Russia.

If they ever find anything on Trump, great. Throw it out there, but there's more evidence Obama was born in Kenya, and I don't believe that one either.

The root of this argument is either you believe that wild conspiracy theory that Trump is the Machurian Candidate and colluded with Russia to steal an election away from the rightful heir to the throne (Hillary "what difference does it make" Clinton), despite absolutely no evidence for that tope -- or you're in touch with reality and you find the Dems and their Media doing their comical hypocrisy pantomime of what rational humans should act like.

The angry will scream "but the timing", in hoping their followers have as little sense of context as they do.

Sure the timing. 6 months after the FBI cleared the Trump administration of any wrongdoing[14] or collusion with the Russians and election. And after 9 months of investigation has turned up NOTHING. (See: Russian Hackers: The Evidence).

The AG and Deputy AG recommends that Trump fire Comey, and so he did so.

The left is certain there's something there, because a lack of evidence is proof of Trump's guilt. In their minds the firing now, is proof that Comey was close to uncovering something (or has the goods) and firing him would somehow NOT encourage Comey to use the Nuclear Option and blow his wad to the public? It's bafflingly illogical. If Comey had something, then the last thing Trump would do is fire him.

Now they're saying because he didn't fire him on Day-1, it shows that Comey must have found something. But of course, we know if he'd fired Comey on Day-1 they would have screamed how rash and partisan a move that was too. And this fits the left's pattern of attacking every single thing Trump does, whether they demanded it or not.

Comey and Wife both partisans: