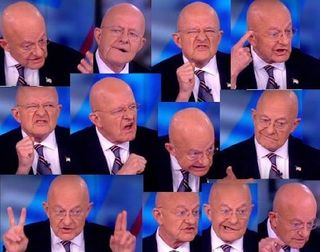 James Robert Clapper is an Obama crony, serial liar, Russia conspiracy theorist, former Director of National Intelligence. So far, he was caught perjuring himself to congress by saying that "the NSA does not collect information on Americans"... then the NSA program that did that was exposed. He apologized for a mistake, then lied about that. He lied about releasing all the Osama Bin Laden documents. He lied about Obama administration spying on Trump, then when caught, he said it's OK because it's a good thing for Trump. He was involved in the suppression and tainting of intelligence information on ISIS's rise. He lied about the scale or intent of Russian involvement in the election. Then he wrote a book about Russian involvement in the election ($110M of $10B spent, and most of it for Sanders or spent after the election) was somehow what changed the election outcome (without any evidence to back any of it up). And he has been treated like the most honest celebrity the leftist media has ever met. Anyone or any program that doesn't question his credibility, or note past lies of his, is intentionally misleading their readers/viewers.

Obama crony, James Clapper told a series of famous lies and perjured himself to congress and the American people on many occasions. So with a history of being a far left appointee and liar, he's often seen on liberal television to promote his latest lie du jur. 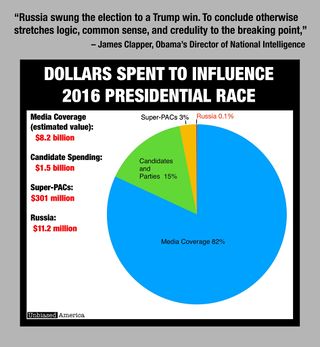