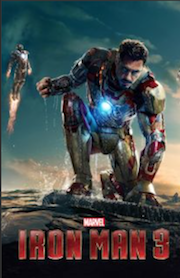 Saw it. Liked it. Thought it was better than any other Ironman, and gave more backstory. 3D was done well, as were the visuals. Did well on Rotten Tomatoes (79/79). Tony Stark always hit me as an annoying douche. He still is, but you at least have some empathy, and see him trying to realize there are other people in the world. They give him personal struggles, and that gives him more depth.

I don't know the graphic novel, but I think the character was like that and Robert Downy fit the role, not the other way around, But not sure, or if this fits the magazines arc (I doubt it). I just didn't like the character much, but the rest of the story and effects were OK. This was the first one that felt like there was depth for me.

They also showed the Man df Steel teaser, and it looked good too. Again much deeper than a super goody-two-shoes. I really liked the dark knight reboot. I'm not a huge super hero movie fan. It's a genre. I don't love it, or hate it... So the stories have to be good enough to hold their own. This one was good enough to do that.